Even though it isn’t a “blood moon,” a partial eclipse of the Beaver Moon on Friday (Nov. 19) will likely darken the moon.

During a lunar eclipse, the moon passes through the Earth’s shadow and is at least partially obscured. During the height of the Beaver Moon, the Earth’s shadow will cover 97 percent of the moon, and it will be far into the shadow’s darkest portion (called the umbra). These two elements should be enough to allow the reddish-brown tint of the refracting sunlight from our planet’s outskirts to cover our lunar neighbour. As such, this isn’t a true blood moon. 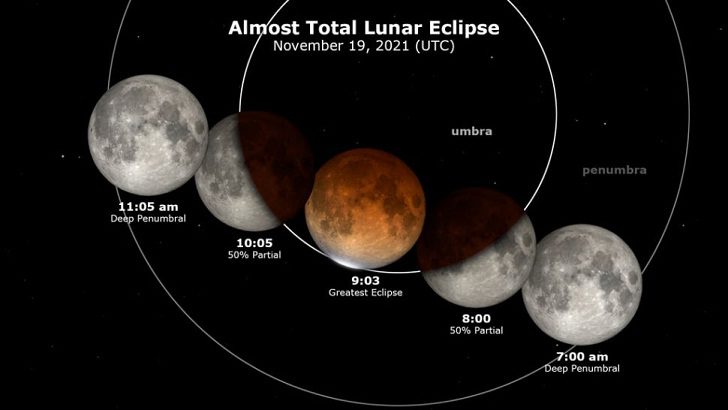 It will begin at roughly 2:19 a.m. EST, and stargazers will be able to see the commencement of the eclipse.

According to NASA, the moon will begin to give off a crimson light at 3:45 a.m. local time as over 95% of its disc is shrouded.

NASA stated on its website that “the colour might be easier to notice via binoculars or a telescope.” At the risk of overexposing the illuminated portion of the Moon, using a camera on a tripod with long exposures can bring out the colour.

In the early hours of the morning, the moon will no longer be red and the partial eclipse will come to an end at 5:47 a.m.