Geoffrey Edelsten, a showy doctor who saved the AFL team the Sydney Swans from extinction and had a string of young spouses, died at the age of 78.

Edelsten died on Friday at his Melbourne home, according to media reports.

Following the discovery of a man’s body in a St Kilda Road flat on Friday afternoon, Victoria Police stated that a report would be prepared for the coroner. The death isn’t being investigated as a homicide. 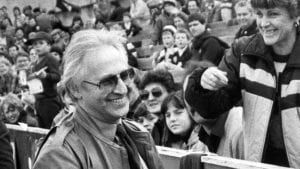 Edelsten was born on May 2, 1943, in Melbourne, and spent the majority of his life surrounded by scandal.

He was born in Carlton to Jewish migrant parents and graduated from the University of Melbourne in 1966.

He became a GP after working as a resident at the Royal Melbourne Hospital and establishing a practise in Sydney’s eastern suburbs with a colleague.

He opened a network of 24-hour medical clinics in the 1980s, complete with grand pianos and chandeliers in the waiting rooms. Patients who were eligible for bulk billing went to the clinics in droves.

In 1988, he was deregistered in NSW, and afterwards in Victoria.

In 1985, he became the Swans’ “white knight,” as he put it, as they faced grave financial strain and questions about their ability to survive.

He was sentenced to prison in 1990 after being found guilty of hiring a well-known hit man, Christopher Dale Flannery, to harm a former patient.

In 2014, Edelsten filed for bankruptcy in Australia and the United States, blaming a series of disastrous business dealings, including “spending” millions on ghetto estates that were on the cheap during the US mortgage crisis.

Edelsten always seemed to find a way back, even when his tumultuous career seemed to be on the verge of collapsing.

His unusual lifestyle drew attention, and he was always a colourful fixture in Melbourne’s social scene.

He had homes, helicopters, and a fleet of costly cars with “macho,” “spunky,” and “sexy” licence plates.

In 2011, he wrote “Enigma,” a book about his life as a musical entrepreneur, country doctor, and metropolitan businessman.

His romances with beautiful young blondes, though, kept him in the spotlight.

After a three-year marriage with his first wife, model Leanne, he divorced her in 1988 and married American fitness instructor Brynne Gordon in 2009, when she was 40 years his junior.

The marriage did not last this time, as Brynne called it quits after four years.

He proposed to American model Gabi Grecko, 46 years his junior, at the Melbourne Cup less than a year later.

Edelsten, ever romantic, knelt down on one knee in front of the assembled press in his brightest yellow suit.

He wanted to make it official because she’d previously proposed to him months before.

Their love bubble broke not long after, with Edelsten claiming adultery and a slew of public spats.