Of the total 5,05,592 vaccines administered so far in Noida and Greater Noida, 4,08,324 people got their first shot and 97,268 got the second dose, showed the figures provided by the district administration.

India’s first 24-hour vaccine centre was inaugurated in Gautam Buddh Nagar on Saturday. According to officials, Felix Hospital in Sector 137 will be administering vaccines round the clock in an effort to reduce rush. Beneficiaries will be required to register a slot on the Cowin website prior to the vaccination. The hospital will have two centres, one of which will be a drive through, said authorities.

Over five lakh doses of anti-coronavirus vaccines, including the second dose, have been administered to people in Uttar Pradesh’s Gautam Buddh Nagar as on Monday, according to official figures.

While vaccination for people aged 45 and above and those in front line of work during the pandemic had started earlier this year, inoculation for the 18-44 year age group started on May 11 in Gautam Buddh Nagar. 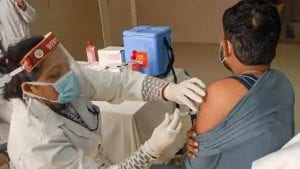 More than 1,000 slots were booked on the inaugural day of the 24-hour centre. For now, only those that have been given a slot on Cowin will be allowed to take vaccines. In the coming week, hospital authorities are planning to commence walk-in operations as well. The hospital has appointed 70 staff members who will be working on rotation.

The inauguration was carried out in the presence of DM, Chief Medical Officer and District Immunisation Officer. Gautam Buddh Nagar, till Friday, registered 5.7 lakh vaccines covering approximately 30% of the population.