The Indian cricket team for the tour of Sri Lanka has been announced….

The Indian cricket team for the tour of Sri Lanka has been announced. The India-Sri Lanka series will consist of three ODIs and three T20Is. The tour, which begins on July 13, ends on July 25. 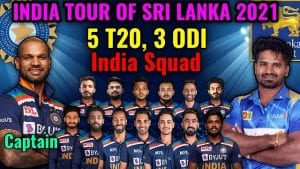 The Indian cricket team for the tour of Sri Lanka from July 13 has been announced. There are three ODIs and three T20Is on tour. With the senior players rested, Shikhar Dhawan will lead India in Sri Lanka. Fast bowler
Bhuvneshwar Kumar, vice-captain.

LIVE SCORE : ENGLAND VS NEW ZEALAND : DAY 1 OF THE 2ND TEST BETWEEN Sibley and Burns put up a 50-run stand

Malayalee player Sanju Samson has returned to the Indian team. Sanju’s excellent performance in the IPL brought him to the team. Along with Sanju, Ishant Kishan has also been named in the squad as a wicketkeeper.