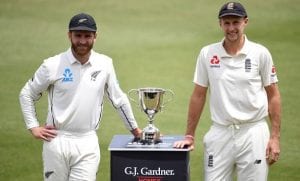 The England openers have given the team a steady start, completing the first hour of play on Day 1 of the second Test at Edgbaston Cricket Ground in Birmingham today. Despite the cloudy conditions, the ball did not swing wildly in the first hour of play. There has been the odd play and miss, but Rory Burns and Dominic Sibley have given no chances.

England captain Joe Root had previously won the toss and elected to bat first. New Zealand would be hoping to win for the first time in 22 years in Edgbaston. After usual skipper Kane Williamson is expected to miss this match owing to an elbow injury, Tom Latham will take over as captain of the New Zealand cricket team.

England vs New Zealand live telecast and streaming in India

The ENG vs NZ 2nd Test will be telecast live on Sony Sports Network. Sony TEN 1 HD/SD will live broadcast the matches with English commentary. The Live streaming of England vs New Zealand match will be available on Sony Liv app and website.

On the first day of the second Test against New Zealand at Edgbaston on Thursday, England openers Rory Burns (batting 32) and Dominic Sibley (batting 31) held off the new-ball challenge and pushed their team to 67 without loss at lunch.

New Zealand, who made six changes to their playing XI, resting key bowlers Tim Southee and Kyle Jamieson in order to keep them fresh for the World Test Championship final against India, which starts on June 18, struggled to make breakthroughs in the first session, despite using all five of their bowlers.

So good to hear that ovation for our openers at lunch 👏

Trent Boult, a left-arm seamer who returned to the lineup after missing the first Test, bowled nine overs for 18 runs with no wickets.

State of Origin 2021 Kick Off Time : Hunt misses out, Blues backline is as ‘weak as piss’ Queensland burned

Matt Henry and Daryl Mitchell, who were called in as replacements, each bowled 10 overs but failed to make an impression.

In his five overs, left-arm spinner Ajaz Patel, who replaced the injured Mitchell Santner, was frugal but failed to create a breakthrough.

Olly Stone was brought in to replace Ollie Robinson, who was suspended from Test cricket after some of his past racist and misogynistic messages went public on social media during the first Test match.