Cyclone Yasa Current Location : Cyclone Yaas likely to make landfall near Dhamra Port in Odisha’s Bhadrak district early on Wednesday morning. In coastal districts of Odisha, police teams have intensified the evacuation drive and evacuated & shifted 81,661 people from vulnerable areas to cyclone centres so far. The operation is being expedited and will be finished by the evening: YK Jethwa, ADG (Law & Order).

On 25th May at 11.30am, Cyclone Yaas is about 220 km south-southeast of Paradip. To intensify further and cross north Odisha-West Bengal coasts close to north of Dhamra and south of Balasore, during May 26 noon as a very severe cyclonic storm: IMD. Over 3 lakh people have been evacuated from low-lying and vulnerable areas in Odisha so far in view of Cylcone Yaas.

The cyclone is expected to make landfall near Dhamra Port in Bhadrak district early on Wednesday morning.

In view of the storm, the coastal states of West Bengal, Odisha and Jharkhand carried out a mass evacuation drive and shifted over 12 lakh people to safe shelters by late evening.

‘Yaas’, which was positioned 160 km south-southeast of Paradip in Odisha and 240 km south-southeast of Digha in West Bengal over north-west and adjoining west-central Bay of Bengal on Tuesday evening, is likely to gain a maximum speed of 155 kmph to 165 kmph gusting to 185 kmph during landfall, the Met department said.

Landfall process started around 9 am 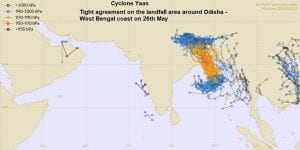 How prepared is Odisha State for Yaas Cyclone

Odisha has already prepared 800 shelters to house citizens from seacoast areas. In an addition to that, schools, government buildings, and colleges are which are not in use will also be used for the shelters if need be. Officials are also going to maintain the social distancing to avoid Covid surge so they are preparing as many shelters as possible.

As a rule-of-thumb, the monsoon makes its onset over Kerala roughly ten days after it makes its advent over the south Andaman Sea. However, due to the interference of cyclonic storms, this theory may not hold true, as was observed last year due to Nisarga and Amphan.

The Cyclone Yaas weather system is likely to hit the eastern or the Coromandel coast of the country on the evening of May 26, the India Meteorological Department said in its tropical cyclone outlook.

This cyclone Yaas will not have any direct impact to Tamil Nadu except Kanyakumari will get pull effect rains as it activates the arabian sea monsoon winds from 25th. South TN will get spill over from west and so will some western districts. Heavy Rains – Kerala will also have heavy rains particularly in south Kerala for next 5-6 days from 25th may. Trivandrum, Kollam and Kanyakumari has chance of heavy rains on some days between 25-31st May.

Rise in Temperature for SAP and NTN

Temperature in north TN (Tiruvallur To Thanjavur) and north coastal TN like Chennai, Cuddalore, Pondy, South AP like Nellore will increase to 39-41 (+ or – 1 or 2) for 5-6 days with strong North westerlies.

In West Bengal, the state government has advised all District Magistrates to take urgent measures in view of the approaching cyclone. Further, round the clock control rooms will start functioning in the state from Friday.

“All cyclone centres and shelters have been asked to be readied. The district magistrates have been directed to take all precautionary measures in the wake of the warnings,” an official said.