Covid-19 vaccinination Side Effects It is typical for the immune system to res" />
News Ticker
Views: 1,183

It is typical for the immune system to respond to vaccines with temporary side effects such as headache, exhaustion, and fever. These are all indicators that the immune system is revving up. They’re also quite prevalent.

“I wouldn’t schedule anything that involved heavy physical activity the day after getting these vaccines,” said Dr. Peter Marks, director of the US Food and Drug Administration’s vaccine division, who reported feeling fatigued after his first dosage. 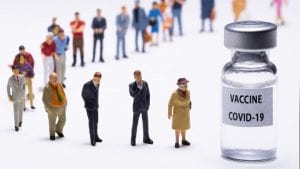 Although everyone reacts differently, if you don’t feel anything for a day or two after either dosage, it doesn’t always imply that the vaccination isn’t doing its job.

Behind the scenes, the shots also set in motion the second portion of your immune system, which will ultimately give the most effective defence against the virus by creating antibodies against it.

Another annoying side effect of the COVID-19 immunisation is that it can induce temporary swelling in lymph nodes, particularly those under the arm. Women are advised to arrange routine mammograms prior to the vaccine in order to avoid having a swollen node misdiagnosed as cancer.

However, after hundreds of millions of vaccine doses have been provided over the world — and after extensive safety monitoring — only a small number of major concerns have been detected.

A small number of patients who received vaccines manufactured by AstraZeneca and Johnson & Johnson experienced a unique sort of blood clot. Although several countries restricted access to those doses to older folks, regulatory officials say the advantages of providing them exceed the risks.

People can also have major allergic responses to the COVID-19 vaccination, which is why you’re requested to stay for around 15 minutes after receiving any form of COVID-19 vaccine — to guarantee that any reaction can be addressed as soon as possible.

Finally, regulators are investigating if transient cardiac inflammation, which can occur with many types of infections, may also be a rare side effect of mRNA vaccines, such as those manufactured by Pfizer and Moderna.

Health experts in the United States are currently unable to determine whether there is a relation, but they are closely monitoring a small number of reports, which are primarily from male teens or young adults.