Large terrain, realistic weather, and three multiplayer modes are all included in Battlefield 2042.
EA DICE has stated that Battlefield 6 will be titled ‘Battlefield 2042,’ and that it will be released on October 22, 2021. 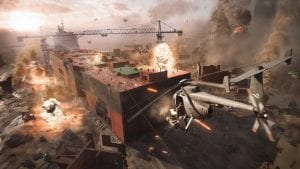 The new Battlefield is being billed as the series’ “most ambitious” edition yet, with 128-player levels available on the latest consoles and PC, as well as a slew of new weaponry, vehicles, and gadgets – and yes, reports of a robot dog were accurate.

While there will be no campaign mode or suspected Battle Royale mode in Battlefield 2042, players will have access to three “unique, distinctive multiplayer experiences.” Do you want to learn more? We recently attended a briefing on the upcoming Battlefield, so keep reading to find out all we learned about Battlefield 2042.

Battlefield 2042 takes place in a planet on the verge of annihilation. Following the failure of many of the world’s nations, food, energy, and water shortages have resulted in the “biggest refugee crisis in human history.” The “Non-Patriated” (also known as the No-Pats) are a group of refugees made up of families, farmers, engineers, and warriors who have been left without a homeland.

The United States and Russia are the last two superpowers standing, fighting for control of the world’s few surviving resources. Non-Pat Specialists join both sides to ensure that they have “a seat at the table” when the final bullet is fired. One of these Non-Pat Specialists will be played by the players.

Battlefield 2042 has been dubbed a “genuine evolution” of the Battlefield franchise by EA DICE.

The first of these multiplayer experiences is All-Out War, which is characterised as a “next-generation” of the series’ previous Conquest and Breakthrough modes. On PC, PS5, and Xbox Series X, this mode boasts massive 128-player levels, while PS4 and Xbox One users will get 64-player versions of these levels, which have been scaled down for last-gen consoles but are still larger than prior entries. “Gameplay, events, and moments will all be felt for Battlefield players on whatever platform they play on,” according to EA DICE.

Conquest mode is described as a “traditional all-out war experience” in which players fight over a large area. This mode, according to EA DICE, has a lot of variety in terms of speed, with players deciding where to travel and how to fight. Conquest, according to EA DICE, will have moments with a large number of players, making fighting a little chaotic, as well as periods that are less chaotic and more personal.

On the other side, Breakthrough offers a more structured event. In this mode, one side attacks while the other defends in an attempt to take territory, and both sides will clash in epic battles.

The possibility to play this multiplayer experience against and with AI players is available for people who aren’t comfortable battling against real players or wish to obtain a better understanding of Battlefield before getting into these matches. You’ll be able to play with both real-life and AI opponents. According to reports, these AI players will scale dependent on a player’s skill.

Kaleidoscope is a term used to describe a collection of Set in Sogdo, South Korea, the game pits you against each other to control a disinformation centre. This map has multi-story skyscrapers, canals with amphibious vehicles, a TV station, and ziplines that allow you to travel across roofs.

Players will compete for access to supply lines on Singapore’s Branai Island. A vast container yard and automated cranes pick up and shift containers while you play this map. Ships with capture points are also available to players. This map’s combat is said to be “intense.”

This map, set in Kourou, French Guiana, has you fighting over a rocket launch site as a “controversial space launch turns into a race against time.” This map shows a lot of activity around the rocket launch and surrounding area, and the rocket can even take off – however things don’t always go as to plan…

This map is situated in Alang, India, and features groups battling for control of rogue nuclear assets. There are several large stranded ships strewn over this area, stuck owing to changing sea levels, including one named ‘Colossus,’ which has a submarine.

Renewal is a game set in Egypt’s Eastern Desert, where players compete for a pioneering agriculture technology centre. This is a map with two halves: a lush and verdant side and a barren desolation on the other.
a timepiece

Hourglass is a “city lost in time” set in Doha, Qatar, in which players must search for a missing convoy. A neon city with buildings that light up as giant sandstorms sweep through, a stadium overtaken by sand, and a gigantic highway interchange where the convoy has come to a halt are all featured on this map, which is one of the larger ones.

Due to the vastness of these maps, each is divided into various sectors, each with many objectives grouped in clusters inside those sectors. Clusters, such as a community, stadium, or oil platform, are regions where objects and purposes are concentrated in one location. Securing a sector necessitates achieving all of the objectives inside that sector, which changes how you seize control of territories.

In Battlefield 2042, players will take on the role of Specialists, soldiers with their own distinct Special Trait and Speciality, as well as fully configurable loadouts that allow them to wield any weapon. The classic four Battlefield classes have inspired specialists: Recon, Support, Assault, and Medic.

The first gameplay clip from Battlefield 2042 has been released: Best way to see the Initial Gameplay Reveal