Fans and well-wishers were in for a treat when Bollywood star Yami Gautam turned to social media on Friday evening to share a photo from her wedding. Aditya Dhar, the director of Uri: The Surgical Strike, and the Vicky Donor actress recently married. She uploaded the first official image from her wedding on her official Instagram account, and it looks like something out of a fairy tale. 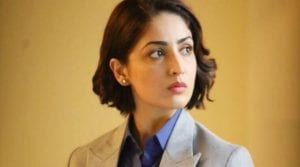 Yami is dressed like a traditional bride in red, with jewellery to complete her outfit, while Aditya is dressed in a white sherwani with embroidered details. She also included a touching comment with the photo, which said, “In your light, I learn to love – Rumi.” “..

“Today, we tied the knot in a modest wedding ceremony with the blessings of our family. We celebrated this wonderful occasion with our immediate family because we are pretty private individuals. We ask for your prayers and best wishes as we embark on this path of love and friendship. Aditya, Yami, and Love “, the note went on to say.
While Yami (32) has long been a familiar face in the worlds of advertising and showbiz, Aditya (38) has been a part of the Bollywood industry since 2008.

Before working on TV shows like Chand Ke Paar Chalo, CID, and Ye Pyaar Na Hoga Kam, Yami appeared in popular commercials. Before making her Hindi debut in 2012 with filmmaker Shoojit Sircar’s Vicky Donor, she worked in regional language cinema industries such as Telugu, Kannada, and Punjabi. The film was a huge hit, giving her a foothold in Bollywood.

Aditya wrote the songs for Kabul Express before going on to create lyrics for movies like Haal-e-Dil and One Two Three. Aakrosh and Tezz’s dialogues were also written by him. Uri, his first picture as a filmmaker in 2019, was a major smash. He is currently working on The Immoratl Aswatthama.