WWE congratulates them on their success and wishes them well in their future efforts.” 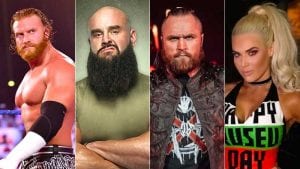 “I’m gathering my thoughts as this was completely out of left field for me since obviously we just started the dark father persona but this was it,” Black posted on Twitter. “Thank you so much WWE universe for enabling me to create and give you small bits of me,” he added.

Former strongman contender Strowman joined the WWE in 2013 and made his debut appearance on television in 2014. Over the duration of his six-year reign, he held both the WWE universal and intercontinental championships. In July 2019, Strowman announced that he has signed a new four-year contract with the business.

AMC Premarket Stock Price : The movie theatre business AMC is on the rise after attracting DIY traders with free popcorn.

After a long career on the independent circuit, Black made his WWE debut in 2017. As a breakout talent and eventual NXT champion, he became a staple on the NXT roster. In 2019, he made his main roster debut. After a six-month absence, Black was seen in vignettes on SmackDown as recently as late April.

At this time, it’s unclear whether more cuts are on the way. This isn’t the first time the corporation has made drastic changes like this. During the peak of the COVID-19 outbreak last year, the firm lost 18 wrestlers and more on the production side to decrease costs.