Vinyasa Yoga Classes Near Me 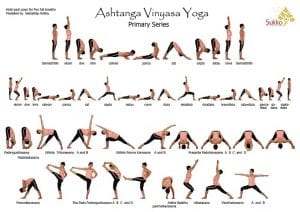 Vinyasa Yoga or Vinyasa Flow is not a system and does not follow a clear lineage, hierarchy or leading guru. There is no official founder of Vinyasa Yoga. Vinyasa Yoga is a modern style of yoga, born out of the Ashtanga Vinyasa Yoga tradition. The Ashtanga Vinyasa tradition, in turn, is based on the teachings of Sri Krishnamacharya.  Krishnamacharya taught that the movements between each asana should be considered just as important as the postures themselves. His idea behind this was to deepen concentration and body consciousness throughout the entire practice. Rather than focusing on “getting into the posture” and then breathing, in Vinyasa Yoga, the aim is to keep the deep breathing and body consciousness consistent throughout all movements during the practice.

What is Vinyasa (Flow) Yoga?

What does Vinyasa mean?

The term vinyasa is a composition of two words. Nyasa has several meanings like “to place”, “special order”, and “attention”, “and vi, which means “specially”. Vinyasa has many meanings in the Sanskrit language, however, in the context of yoga, Vinyasa can be best interpreted as

It is often interpreted as a practice with a theme or purposes consisting of poses linked and associated together.