A significant fast observed by married Hindu women in the hope of extending the life of their husbands is known as Purnima Vrat. On the Hindu calendar, the day is known as Jyeshtha Purnima, and it will be celebrated on June 24 this year. The Vat Purnima Vrat tithi will begin at 3:23 a.m. on June 24 and will end at 12:09 a.m. on June 25. It will last for 24 hours. This vrat is observed by the majority of women from Gujarat, Maharashtra, and southern Indian states.

This fast is extremely similar to the Vat Savitri Vrat, which occurs on Jyeshtha Amavasya and is observed on the same day. In truth, the rationale for observing the fast is the same as it has always been. 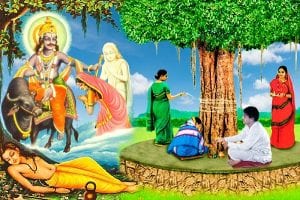 According to Hindu mythology, Savitri had deceived Lord Yama (the God of death) in such a way that he had no choice but to restore the life of her husband, Satyawan, who had been killed. This episode became well-known, and many married women began praying in a similar manner for the long lives of their husbands as a result.

Women who observe this fast take a bath first thing in the morning and put on fresh clothing. They wear sindoor and bangles while performing their shringaar. Many women also choose to decorate their hands with henna and to accessorise with heavy jewellery for the event. According to tradition, persons who observe this fast are also required to remain celibate for the duration of the day.

The women perform puja under a banyan tree during the day’s shubh muhurat (time of day). As part of the practise, they place idols of Satyavan and Savitri on the ground and present vermillion, fruits, and other items to them. The banyan tree is then presented with flowers, rice, water, gramme seeds, and some special foods prepared especially for the occasion.

Following the completion of the puja, the fasting women wrap the yellow and red thread around the tree trunk while doing parikrama. After that, they repeat or listen to the storey of Satyavan and Savitri, which brings the day’s puja to a close. Later on, the prasad is distributed among the participants.