The Santa Monica History Museum debuted “Love, Shirley Temple,” a special exhibit presenting a collection of her unique artefacts, on this day in 2015. 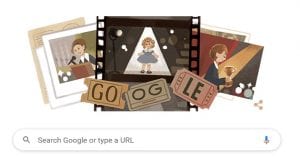 Temple not only helped millions of Americans endure the Great Depression as Hollywood’s top box office draw, but she also later shared her charisma with the globe through her work in international affairs, according to Google.

Temple was born in Santa Monica, California, on April 23, 1928. She began taking dance lessons at the age of three and captured the nation’s attention when she got a role in the 1934 musical Stand Up And Cheer.

In the year 1934, the “Little Miss Miracle” appeared in a dozen films. She was one of the most well-known actors in Hollywood, and at the age of six, she became the first child performer to win an Academy Award.

She left the movie industry at the age of 22 as a Hollywood celebrity, but later narrated the children’s television series “Shirley Temple’s Storybook,” which recreated family-friendly stories.

Following that, the Republican politician was appointed as the United States’ ambassador to Ghana and Czechoslovakia, making her the State Department’s first female Chief of Protocol.

Temple received the Screen Actors Guild’s Lifetime Achievement Award in 2006, the organization’s highest honour. Temple died in 2014, and her three children survived her.

Most of the Shirley Temple films were inexpensively made at $200,000 or $300,000 apiece, and were comedy-dramas with songs and dances added, sentimental and melodramatic situations, and bearing little production value. Her film titles are a clue to the way she was marketed—Curly Top and Dimples, and her “little” pictures such as The Little Colonel and The Littlest Rebel.

Shirley often played a fixer-upper, a precocious Cupid, or the good fairy in these films, reuniting her estranged parents or smoothing out the wrinkles in the romances of young couples. Elements of the traditional fairy tale were woven into her films: wholesome goodness triumphing over meanness and evil, for example, or wealth over poverty, marriage over divorce, or a booming economy over a depressed one.

As the girl matured into a pre-adolescent, the formula was altered slightly to encourage her naturalness, naïveté, and tomboyishness to come forth and shine while her infant innocence, which had served her well at six but was inappropriate for her tweens (or later childhood years), was toned down.

In 1935, Fox Films merged with Twentieth Century Pictures to become 20th Century-Fox. Producer and studio head Darryl F. Zanuck focused his attention and resources upon cultivating Shirley’s superstar status. She was said to be the studio’s greatest asset. Nineteen writers, known as the Shirley Temple Story Development team, made 11 original stories and some adaptations of the classics for her.

In keeping with her star status, Winfield Sheehan built Temple a four-room bungalow at the studio with a garden, a picket fence, a tree with a swing, and a rabbit pen. The living room wall was painted with a mural depicting her as a fairy-tale princess wearing a golden star on her head. Under Zanuck, she was assigned a bodyguard, John Griffith, a childhood friend of Zanuck’s, and, at the end of 1935, Frances “Klammie” Klampt became her tutor at the studio.

Temple had her own radio series on CBS. Junior Miss debuted March 4, 1942, in which she played the title role. The series was based on stories by Sally Benson. Sponsored by Procter & Gamble, Junior Miss was directed by Gordon Hughes, with David Rose as musical director.

At age 44, in 1972, Temple was diagnosed with breast cancer. The tumor was removed and a modified radical mastectomy performed. At the time, cancer was typically discussed in hushed whispers, and Temple’s public disclosure was a significant milestone in improving breast cancer awareness and reducing stigma around the disease. She announced the results of the operation on radio and television and in a February 1973 article for the magazine McCall’s.

Temple died at age 85 on February 10, 2014, at her home in Woodside, California. The cause of death, according to her death certificate released on March 3, 2014, was chronic obstructive pulmonary disease (COPD). Temple was a lifelong cigarette smoker but avoided displaying her habit in public because she did not want to set a bad example for her fans. She is buried at Alta Mesa Memorial Park.