Seven Sleepers’ Day (German: Siebenschläfertag) on June 27 is a feast day commemorating the legend of the Seven Sleepers as well as one of the best-known bits of traditional weather lore (expressed as a proverb) remaining in German-speaking Europe. The atmospheric conditions on that day are supposed to determine or predict the average summer weather of the next seven weeks.

The legend of the Seven Sleepers of Ephesus was first presented by Jacob of Serugh around 500 AD and later popularized by Gregory of Tours. Its Western version was part of the widely distributed Golden Legend hagiography collection compiled by Jacobus de Varagine about 1260. The cult became common during the Crusades of the High and Late Middle Ages, and June 27 was declared a commemoration day in most of the Catholic dioceses. Contrary to popular belief, the name of the day does not refer to the edible dormouse (Glis glis), a rodent known as Siebenschläfer in German for its seven-month hibernation.

The story appears in the Qur’an (Surah Al-Kahf 18:26), where they are called “The people of the cave”. The Islamic version includes more details such as the mention of a dog, who accompanied the youths into the cave and appears to keep watch. In this version the people slept for 300 years (according to Gregorian calendar) or 309 years according to the lunar calendar

Seven Sleepers Day (Siebenschläfertag) is a feast day observed in Germany on June 27 each year. It commemorates the Christian legend about the Seven Sleepers of Ephesus. 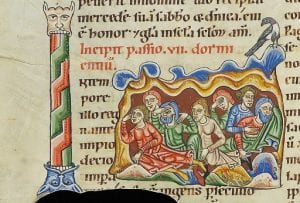 The Seven Sleepers of Ephesus were a group of youth who were persecuted for being Christian during the reign of the Roman emperor Decius. They hid in a cave near Ephesus to escape and fell asleep. They awoke only 180 years later, when Christians were not persecuted in the Roman Empire anymore.

Seven Sleepers Day was declared a commemoration day in the Middle Ages. There is a traditional weather lore associated with it. The weather on the day is supposed to determine the average weather conditions of the following seven weeks.

Contrary to popular belief, Seven Sleepers Day has nothing to do with the edible dormouse that is called Siebenschläfer in Germany.

There is some confusion as to whether Seven Sleepers Day should still be celebrated on June 27. The weather lore associated with the day had emerged before the Gregorian calendar reform that occurred in 1582.

Taking into account the difference between the Gregorian calendar and the Julian calendar, Seven Sleepers Day should be celebrated on July 7 instead of June 27. Nevertheless, it’s date hasn’t changed since the reform, it is observed on the same day as before.