In 2021, the Moon will appear opposite the Sun and completely illuminated on June 24, 2021, at 18:40 UTC, which is 1:40 p.m. Central Daylight Time (CDT). The Moon will be totally illuminated at this time (UTC-5). This full Moon is particularly noteworthy for two reasons: it is a Strawberry Moon, and it is also the last supermoon of the year!

The Strawberry Moon occurs on the last full Moon of spring or the first full Moon of summer, depending on when you are reading this. From late June through early July, the Moon often takes up a lower position in the sky, allowing it to shine through more of our atmosphere. As a result, our Moon can occasionally have a pinkish tinge to its appearance. 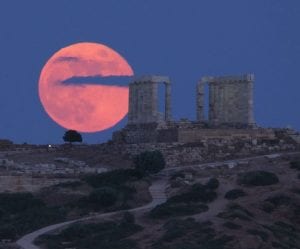 Surprisingly, the term is most likely derived from the time of year during which the flower blooms rather than the distinctive pink hue. Strawberry Moon was the name given by some Native American tribes to this full moon since it signified the time of year when growing strawberries and other fruits should be harvested.

It is called a supermoon when a full Moon occurs at the same time as the Moon’s closest approach to the Earth in its elliptical orbit, which is known as perigee. During every 27-day orbit around the Earth, the Moon reaches both its closest point, known as perigee, which is approximately 226,000 miles from Earth, and its furthest point, known as apogee, which is approximately 251,000 miles from Earth.

In spite of the fact that supermoon is not an official astronomical term, it is commonly used to describe a full Moon that is near 90 percent of its perigee point. It looks that the Moon is larger and brighter than usual during this phase. A new Moon may also be referred to as a supermoon. We do not normally see a new Moon because it is between the Earth and the Sun and, as a result, does not receive any illumination.

If you’re outside during the Super Strawberry Moon’s moonrise, which occurs approximately 20 minutes after sunset local time, you’ll have a better chance of catching a glimpse of the moon.

2021 will see the last of four supermoons, the Super Strawberry Moon being the last of these. It is only three to four times a year that supermoons occur, and they always come in a sequence. The last three supermoons happened on May 26, April 27, and March 28 of the current year, respectively.

Watchers of the sky, please take time to take in the sunset in the west. If you glance toward the east, you may notice the slight pink colour of our Super Strawberry Moon.