There has been widespread concern about the spread of scrub typhus in the region. All you need to know about it is here.

Mystery fever from parts of Uttar Pradesh, mostly kids for the past one week has been reported, claiming more than 40 lives. Scrub typhus has been found in the viral fever.

CEO Yogi Adityanath has visited this region and confirmed the disease causes the death of 32 children and 7 adults. He said that a team of Lucknow’s Medical University King George’s experts would test the deaths especially of children due to scrub typhus and find out why the outbreak was taking place. In the aftermath of the scrub typhus outbreak, the Uttar Pradesh government transferred the Firozabad chief medical officer. The situation was taken up by an Indian Council of Medical Research (ICMR) team.

ollocard.com Activate and Login Account : How to Activate Ollo Mastercard

There has been widespread concern about the spread of scrub typhus in the region. Another team of 15 Lucknow doctors visited the areas concerned to realise the situation.

Scrub typhus, also known as bush typhus, is a disease caused by a bacteria called Orientia tsutsugamushi. Scrub typhus is spread to people through bites of infected chiggers (larval mites). The most common symptoms of scrub typhus include fever, headache, body aches, and sometimes rash. Most cases of scrub typhus occur in rural areas of Southeast Asia, Indonesia, China, Japan, India, and northern Australia. Anyone living in or traveling to areas where scrub typhus is found could get infected.

Rickettsial infection, previously reported in India and other South Asian Countries, is a reemerging Rickettsial infection. It is a disease that is transmitted by a vector. It begins with fever and rashes and has implications for the central nervous system, the cardiovascular, the renal, respiratory and gastrointestinal systems.

The US National Library of Medicine states that a vector carries its name “scrub” due to the type of vegetation (ground between forests and clearings). The Greek word “typhus” means stupor or smoke for “fever.”

More than 1 billion individuals are at risk of scrub typhus worldwide and estimated to occur annually in 1 million cases.

Symptoms of scrub typhus usually begin within 10 days of being bitten. Signs and symptoms may include: 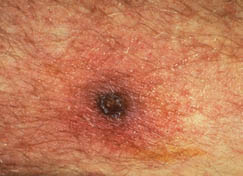 People with severe illness may develop organ failure and bleeding, which can be fatal if left untreated. 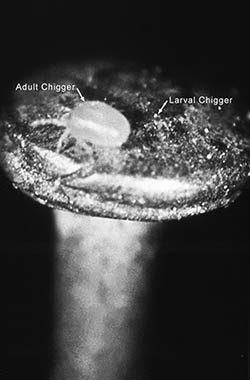 Figure 2. Adult and larval chiggers (mites) on the head of a pin