After an object hurled from the stands hit Sevilla’s Joan Jordán on the head, the Copa del Rey derby match between Real Betis and Sevilla was halted.

On Sunday, at 4 p.m. local time, the match will resume behind closed doors (3pm GMT). However, no fans will be allowed to “guarantee” that the match will end without further incidents “considering the seriousness of what happened,” according to the Spanish federation.

According to reports in the Spanish press, police have detained the person suspected of hurling the object from the stands.

When Jordán was celebrating Betis’ 39th-minute equaliser, scored from a corner by Nabil Fekir, the oblong object struck him.

Jordán collapsed on the ground with his hands on his head. The referee Ricardo de Burgos ordered the teams to follow him off the field just as quickly as he was able to get back on his feet. There had been an extended period of time between when the federation announced that the match had been suspended and when the game was finally resumed, after more than 20 minutes. 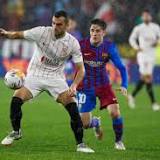 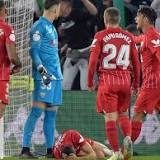 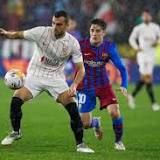 Ottumwacourier
Suspended game in Spain to resume without injured player 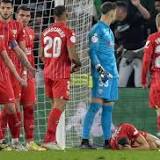 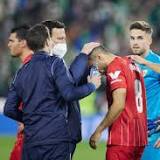 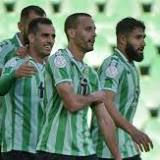