Unaru (Wake Up) is a 1984 Indian Malayalam-language political drama film directed by Mani Ratnam and written by T. Damodaran, starring Mohanlal, Sukumaran, Ratheesh, Sabitha Anand, Ashokan and Balan K. Nair.The film gives the inside view of the problems that arose in the labour trade union parties in Kerala, with music composed by Ilaiyaraaja and cinematography by Ramachandra Babu. 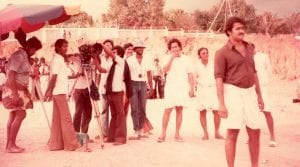 Producer N. G. John, who had experienced success with Ee Nadu (1982) and Iniyengilum (1983), had been impressed with Mani Ratnam’s debut film Pallavi Anu Pallavi (1983), a low-budget Kannada film that tackled a complex subject. John offered Ratnam the chance to direct a Malayalam film for his production house. Ratnam initially narrated the script of Mouna Ragam (1986), then titled Divya, to John but the producer wanted to make a political film. Subsequently, he began work on Unaru, which revolved around corruption in the labour union movement and scripted the film alongside John and Damodaran. Ratnam revealed that he struggled with the film, owing to its alien concept from his previous film on human relationships, as well as due to the sheer number of artistes involved. The film began production in February 1984 and was shot in a single stretch.

On the work front, Prithviraj was shooting for Kaduva when its shoot had to be temporarily suspended due to growing cases of coronavirus.

Directed by Shaji Kailas, Kaduva is said to be a mass action entertainer. Kaduva will mark Prithviraj’s second collaboration with Shaji Kailas after Simhasanam (2012).