During a visit to south-eastern France, French President Emmanuel Macron was hit in the face by a guy in the crowd. 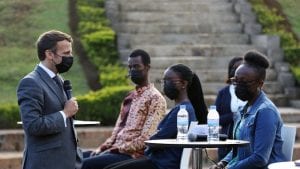 Before delivering a slap to Mr Macron’s face, a guy could be heard saying “Down with Macronia” (“A Bas La Macronie”).

Two persons were arrested, according to local media, in connection with the incident, which was extensively circulated on social media.

French President Emmanuel Macron was slapped across the face by a man during a trip to southeast France on Tuesday. Macron approached a barrier to shake hands with a man who slapped the 43-year-old across the face in the village of Tain-l´Hermitage in the Drome region. pic.twitter.com/tk8VYwMo5m

The act was criticised by French officials, who called it “truly, deeply terrible.”

Mr Macron was visiting the Drome region when the event occurred, where he met with restaurateurs and students to discuss how life is returning to normal following the COVID-19 pandemic.

Two persons were arrested, according to local media, in connection with the incident, which was extensively circulated on social media.

Mr Macron was seen strolling towards a crowd of well-wishers who had gathered behind a metal fence, wearing in shirt sleeves.

One man with a green T-shirt, glasses, and a face mask was greeted by the French President, who extended his hand.

The man could be heard yelling “Down with Macronia” (“A Bas La Macronie”) before slapping Mr Macron in the face.

Two members of Mr Macron’s security team confronted the man in the green T-shirt, while another escorted him away.

Mr. Macron has yet to make a statement about the incident.

“Through the head of state, that’s democracy that’s been targeted,” Prime Minister Jean Castex stated before the National Assembly, drawing a round of applause from the audience.

“Of course, democracy is about debate, discussion, idea conflict, and the expression of genuine opinions,” Mr Castex added, “but it can never be about violence, verbal assault, or even physical assault.”

On Twitter, far-right leader Marine Le Pen slammed the event, calling it “intolerable physical attack against the president of the Republic.”

Despite the fact that Mr Macron is her main political opponent, she later stated that the attack was “very, truly terrible.”

The identity of the individual who smacked Mr Macron was unknown, as were his intentions.

The battle cry of the French troops while the country was still a monarchy was “Montjoie Saint Denis,” which the man uttered throughout the incident.