Neisseria gonorrhoeae, also known as gonococcus, or gonococci, is a species of Gram-negative diplococci bacteria isolated by Albert Neisser in 1879. It causes the sexually transmitted genitourinary infection gonorrhea as well as other forms of gonococcal disease including disseminated gonococcemia, septic arthritis, and gonococcal ophthalmia neonatorum.

It is oxidase positive and aerobic, and it survives phagocytosis and grows inside neutrophils. Culturing it requires carbon dioxide supplementation and enriched agar (chocolate agar) with various antibiotics (Thayer–Martin). It exhibits antigenic variation through genetic recombination of its pili and surface proteins that interact with the immune system. 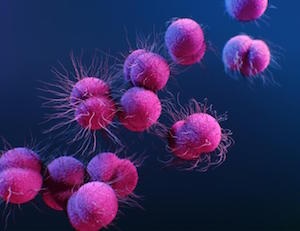 N. gonorrhoeae can cause infection of the genitals, throat, and eyes. Asymptomatic infection is common in males and females. Untreated infection may spread to the rest of the body (disseminated gonorrhea infection), especially the joints (septic arthritis). Untreated infection in women may cause pelvic inflammatory disease and possible infertility due to the resulting scarring. Diagnosis is through culture, Gram stain, or nucleic acid tests, such as polymerase chain reaction, of a urine sample, urethral swab, or cervical swab. Chlamydia co-testing and testing for other STIs is recommended due to high rates of co-infection.

Symptoms of infection with N. gonorrhoeae differ depending on the site of infection and many infections are asymptomatic independent of sex. In symptomatic men, the primary symptom of genitourinary infection is urethritis – burning with urination (dysuria), increased urge to urinate, and a pus-like (purulent) discharge from the penis. The discharge may be foul smelling. If untreated, scarring of the urethra may result in difficulty urinating. Infection may spread from the urethra in the penis to nearby structures, including the testicles (epididymitis/orchitis), or to the prostate (prostatitis).

Men who have had a gonorrhea infection have a significantly increased risk of having prostate cancer. In symptomatic women, the primary symptoms of genitourinary infection are increased vaginal discharge, burning with urination (dysuria), increased urge to urinate, pain with intercourse, or menstrual abnormalities. Pelvic inflammatory disease results if N. gonorrhoeae ascends into the pelvic peritoneum (via the cervix, endometrium, and fallopian tubes). The resulting inflammation and scarring of the fallopian tubes can lead to infertility and increased risk of ectopic pregnancy. Pelvic inflammatory disease develops in 10 to 20% of the females infected with N. gonorrhoeae. It is important to note that depending on the route of transmission, N. gonorrhoeae may cause infection of the throat (pharyngitis) or infection of the anus/rectum (proctitis)

What can travelers do to prevent meningococcal disease?

MenACWY vaccine is a routine vaccination given to pre-teens and teens in the United States. All 11 to 12-year-olds should get a dose of a MenACWY vaccine and a booster shot at age 16. Teens and young adults may also get a MenB vaccine, preferably at 16 through 18 years old.

Younger children and adults may also need a MenACWY vaccine depending on their travel plans. Some people who have been vaccinated before may need a booster shot. It takes 7 to 10 days after a person has been vaccinated before they have maximum protection against the disease. See your doctor as soon as possible before travel to make sure you are protected.