Mexico is in grave danger from Tropical Storm Pamela.

Tropical Storm Pamela, which is intensifying rapidly and becoming more organised over the unusually warm waters off the Pacific coast of Mexico, has prompted a Hurricane Watch for the region’s west-central coast. On Tuesday night, Pamela is forecast to pass near the southern tip of the Baja Peninsula before making landfall on the mainland of Mexico on Wednesday.

Approximately 455 miles southwest of Mazatlan, Mexico, Pamela was moving northwest at 8 mph with a top wind speed of 65 mph and a central pressure of 995 mb on Monday at 11 a.m. Eastern Time. A moist atmosphere, moderate wind shear, and water temperatures around 30 degrees Celsius (86°F) made for ideal development conditions. Better outflow and lower wind shear are expected from Monday night through Tuesday morning, when a new upper-level wind pattern develops.

On Tuesday night, Pamela will recurve to the northeast, passing just south of Baja’s southern tip, as a result of a low pressure system passing to its north. Although the storm’s centre appears to be passing well south of Baja, the National Hurricane Center gave San Jose del Cabo on the southern tip of Baja a 3% chance of receiving hurricane-force winds and a 46% chance of tropical storm-force winds in its 11 a.m. EDT Monday wind probability forecast.

On Wednesday morning, as Pamela approaches the mainland Mexican coast, the water temperature will soar to a scorching 31 degrees Celsius (88 degrees Fahrenheit), more than a degree Celsius above the mean. This unusually warm water in the ocean is largely due to a recent heat wave that brought near-record temperatures to western Mexico. Warm water extends to considerable depths along parts of Pamela’s path, with a total ocean heat content exceeding 100 kilojoules per square centimetre, a value commonly associated with rapid hurricane intensification. 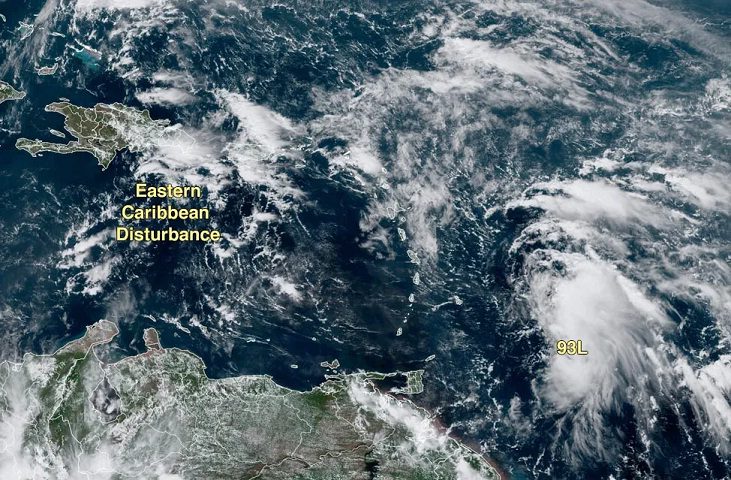 Despite the fact that this warm water favours intensification, Pamela will be bringing in a large amount of dry air from the deserts of Mexico starting on Tuesday, and there may be enough wind shear present to allow this dry air to enter the storm’s core and weaken it. Category 4 strength is possible, as predicted by the HWRF model’s 6Z Monday run. Most top intensity models show Pamela intensifying to a category 2 or 3 hurricane. According to MIT’s experimental forecast of wind density using the GFS ensemble model, Pamela’s maximum wind speed should be between 105 and 140 mph.

At 8 a.m. EDT on Monday, a tropical wave was moving west-northwest at about 15 mph and was about 350 miles east-southeast of the Windward Islands. High wind shear of 20-25 knots hampered the development of this system, which was given the designation 93L. On Monday afternoon, satellite images showed that 93L was rotating at mid-levels of the atmosphere, but there was no evidence of surface circulation. Although there were a few heavy thunderstorms, the system was having trouble absorbing dry air.

When 93L passes near the Lesser Antilles Islands on Tuesday and Wednesday, the steering currents are expected to be weaker, resulting in a 5 mph slow motion to the northwest or north. 93L will bring heavy rains and strong winds to the Lesser Antilles on Tuesday and Wednesday, but it has little model support for development. According to the National Hurricane Center’s Monday Tropical Weather Outlook released at 8 a.m. Eastern Daylight Time, the chances of development for 93L are 20% over the next two days and 50% over the next five days.