The scheme is intended to provide comprehensive health insurance coverage to all serving employees of the State Government including the High Court of Kerala who are covered under the existing Kerala Government Servants Medical Attendant Rules [KGSMA Rules, 1960] and pensioners.

∙ Enter DDO code of office as username. Enter DDO’s mobile number as password. Enter the nearby code and click on the login button.

∙ If enrolled in Medisep, Medisep ID, Aadhaar Number, Name and Date of Birth will be shown. Enter the Medisep ID and go to the home page.

∙ The next page will show the name, gender, date of birth, age and policy status of the employee, spouse and dependents.

∙ Clicking on Download Health Card link below will download the PDF copy of the card containing the details of employee, spouse and dependents. A digital copy or printout of this can be presented at the time of admission to the hospital.

As per the scheme the premium on behalf of the employees and pensioners towards MEDISEP shall be paid by the Government in advance and it will be recouped from the salary of employees and from the gross entitlement of pensioners.

Now, Government have decided to roll out the MEDISEP scheme w. e. f. 01.07.2022 and hence it is ordered that all DDO’s and Treasury officers concerned shall make necessary arrangements for effecting the deduction of monthly premium from the salary of the employees for the month of June 2022 and from the gross entitlement of pensioners for the month of July 2022 onwards.

Necessary arrangements shall be made in SPARK and treasury software in this regard. This order is applicable to Universities and Local Self Government Institutions. Detailed procedure for the various modes of payment of deductions to Government Account will be issued shortly .

The complete list of Hospitals under the MediSep Scheme can be found in the webpage : https://medisep.kerala.gov.in/EmpanelmentHospitalView.jsp

In that page, please select the State and the District , then click on the Search Button. The list of the Hospitals will be shown below.

All serving employees of State Government including teaching and non teaching staff of Aided Schools and Colleges, employees of LSG Institutions and Universities in the State.

All State pensioners including Family/Part time/Exgratia pensioners, pensioners of LSG Institutions and Universities in the State.

Dependents of employees and pensioners. 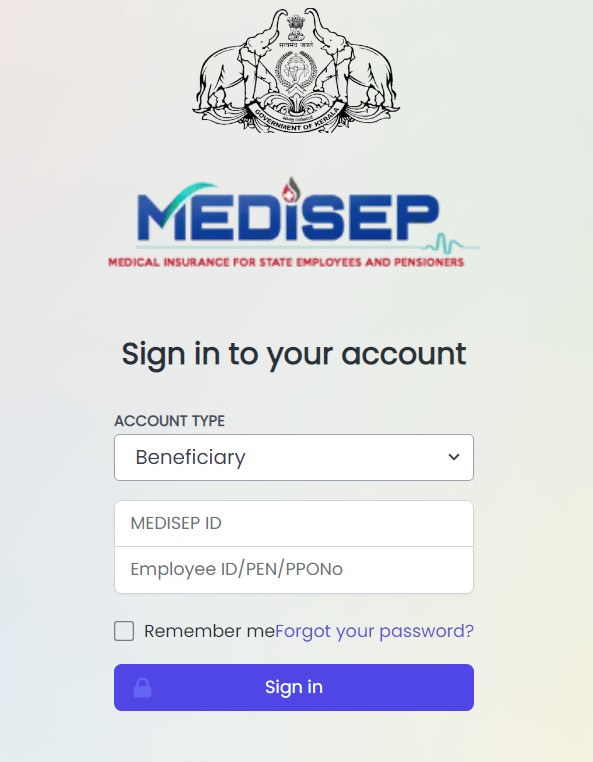 In this Scheme unless the context otherwise requires:

III) Benefits means All Serving employees of the State Government including the High Court of Kerala and their family who are covered under the existing Kerala Government Servants Medical Attendant Rules [KGSMA Rules, 1960], part time contingent employees, part time teachers, teaching & non-teaching staff of aided schools and colleges and their family and pensioners and their spouses and family pensioners on compulsory basis, and all All India Service officers serving under the Government of Kerala on optional basis . In addition to the above mentioned categories, employees and pensioners of the universities which receive Grant-in-Aid from the State Government and Local Self Government Institutions and the directly recruited personal staff of the Chief Minister, Ministers, Leader of Opposition, Chief Whip, Speaker, Deputy Speaker, Chairmen of the Financial Committees and personal staff pensioners/ family pensioners shall also be considered as beneficiary for this scheme. Not withstanding the above, the Authority have the discretion to include or exclude any categories of beneficiaries to / from the coverage of the Scheme at any stage of the Scheme.

IV) Cashless facility means a facility provided to the insured by the insurance company, to make payments of treatment costs directly to the hospital in respect of treatment undergone in a network provider, to the extent of approval given where such treatment is in accordance with the policy terms and conditions.

VI) Day Care Centre means any registered institution established for day care treatment of illness and/or injuries or a medical setup with a hospital and is under supervision of a registered and qualified medical practitioner and must comply with all minimum criterion.

VII) Day one means the date on which the scheme will come into force.

VIII) Dependent means those who are dependent on the employee for their livelihood.

IX) Empaneled Hospitals means those hospitals fulfilling the minimum prescribed standards and thereby tied up as network hospitals by the insurer.

X) Enrolment means registration of beneficiaries to the scheme.

XI) Enrolment Period means the period given for the registration of the beneficiaries to the scheme.

XII) Family means all or any of the following relatives of an insured person, namely:

A. In the case of an insured employee:

(i) legal spouse of the employee (who do not have the eligibility to enroll in this scheme).

(ii)minor or adopted child/children dependent upon the insured, till they get employed, married or attained the age of 25 years whichever is earlier.

(iii) Physically challenged/mentally challenged children of the employee without any age restriction. (certificate should be produced as specified in the scheme).

(iv) dependent parents of the employee .

B. In the case of insured pensioner:

Spouse (who do not have the eligibility to enroll in this scheme) and physically challenged/mentally challenged children of the pensioner without any age restriction.(certificate should be produced as specified in the scheme).

C. In the case of insured family pensioner.

Physically challenged/mentally challenged children of the pensioner without any age restriction. (certificate should be produced as specified in the scheme).

XIV) Medical insurance policy is a contract between an insurer and the Government in which the insurer agrees to provide specified health insurance cover to the employees and pensioners at a particular premium.

XV) Hospital means any institution established for in-patient care and day care treatment of illness and/or injuries and which has been registered as a hospital with the local authorities under relevant Act, having the standards and benchmarks for hospitalisation that provides network prescribed by IRDAI.

XVI) Hospitalization means admission in a Hospital for a minimum period of 24 consecutive In-patient Care hours except for specified procedures/treatments, where such admission could be for a period of less than 24 consecutive hours.

XVII) Inpatient care means treatment for which the insured person has to stay in a hospital for more than 24 hours for a covered event.

XIX) Insured Person means a person who has got insurance coverage under the scheme.

XX) Medical Board means standing medical board constituted by the Director of Health Services consisting of not less than 3 members.

XXI) Medical Expenses means those expenses that an Insured Person has necessarily incurred for medical treatment on account of illness or Accident on the advice of a Medical Practitioner.

XXII) New Born Benefit means the benefit given to the new born child/children along with the insured mother.

XXVI) Period of Contract means three years from the date of signing of MoU/Agreement.

XXVII) Period of Insurance means three years from the date of signing of MoU/Agreement between the Government and Insurer.

XXVIII) Pre-existing disease is a medical condition/disease that existed before the commencement of the insurance coverage obtained from the health insurance policy.

XXXI) Policy plan period means the three year period from the date which the scheme starts.

XXXII) Provider Network means hospitals or health care providers enlisted by an insurer, to provide medical services to an insured by cashless facility.

XXXIII) State Nodal Cell means the implementation and monitoring mechanism for MEDISEP under the Authority.