Marburg is a highly infectious disease that causes hemorrhagic fever, and like Ebola viruses, it belongs to the same family of viruses.

As the nation’s first case of the Marburg virus, a hemorrhagic fever known as Ebola’s cousin, is discovered in the nation’s forested south, Guinea has ordered 155 people into quarantine.

As the illness of the Gueckedou patient, which had started in Liberia, spread, the authorities started tracking everyone who may have come into contact with him in the town of Gueckedou, which is situated on the high-traffic border with Liberia and Sierra Leone. 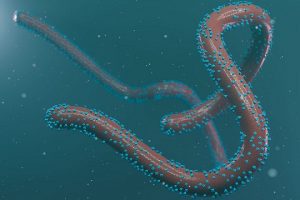 This newly-identified infection started where the deadliest Ebola outbreak occurred in history. Over three West African countries in 2014-2016, the 2014-2016 outbreak killed at least 11,325 people. After this year’s outbreak of Ebola, Guinea is recovering from a smaller scare — a resurgence of the disease in February that claimed 12 lives.

Just two months after Guinea was declared free of Ebola following a brief flare-up earlier this year, the country’s newest case was identified this week.

A statement from the WHO read: “Before his condition rapidly deteriorated, the patient first sought treatment at a local clinic. He then deteriorated rapidly and died.”

Upon sending specimens to the national hemorrhagic fever laboratory in Guinea and the Pasteur Institute in Senegal, both laboratories later confirmed the Marburg virus was present.

Matshidiso Moeti, WHO’s Regional Director for Africa, stated that because of the Marburg virus’s broad potential for dispersion, we need to prevent it in its tracks.

Marburg symptoms include high fever and muscle pains, and some patients later bleed through body openings like eyes and ears, the WHO said.

It is the first time it has been detected in Guinea, but previous outbreaks have erupted elsewhere across Africa in Angola, Congo, Kenya, South Africa and Uganda.

There is no approved drug or vaccine for Marburg, but rehydration and other supportive care can improve a patient’s chances of survival, the WHO said.