On 27 April 2009, the 46664 concerts and the Nelson Mandela Foundation invited the global community to join them in support of an official Mandela Day. Mandela Day is not meant as a public holiday, but as a day to honour the legacy of Nelson Mandela, South Africa’s former President, and his values, through volunteering and community service.

Mandela Day is a global call to action that celebrates the idea that each individual has the power to transform the world, the ability to make an impact.

The Mandela Day campaign message is:

“Nelson Mandela has fought for social justice for 67 years. We’re asking you to start with 67 minutes.”

“We would be honoured if such a day can serve to bring together people around the world to fight poverty and promote peace, reconciliation and cultural diversity,” according to a statement issued on Mandela’s behalf.

To mark the first global celebration of Mandela Day on 18 July 2009, Mandela’s 91st birthday, a series of educational, art exhibit, fund-raising and volunteer events leading up to a concert at Radio City Music Hall on 18 July were organised by the 46664 concerts and the Nelson Mandela Foundation. In November 2009, the United Nations General Assembly formally declared 18 July to be “Nelson Mandela International Day”.

In 2014, the UN General Assembly established the Nelson Mandela Prize, a quinquennial award recognizing the achievements of those who dedicated their lives to the service of humanity.

1. “I have fought against white domination, and I have fought against black domination. I have cherished the ideal of a democratic and free society in which all persons will live together in harmony with equal opportunities. It is an ideal which I hope to live for, and to see realised. But my Lord, if needs be, it is an ideal for which I am prepared to die.”- Defense statement during the Rivonia Trial, 1964

2. “To deny people their human rights is to deny their very humanity.”

3. “No one is born hating another person because of the color of his skin, or his background, or his religion. People must learn to hate, and if they can learn to hate, they can be taught to love, for love comes more naturally to the human heart than its opposite.”

5. “Education is the most powerful weapon which you can use to change the world.”

6. “There can be no keener revelation of a society’s soul than the way in which it treats its children.”

8. “A good head and good heart are always a formidable combination. But when you add to that a literate tongue or pen, then you have something very special.”

9. “I learned that courage was not the absence of fear, but the triumph over it. The brave man is not he who does not feel afraid, but he who conquers that fear.”

11. “I am fundamentally an optimist. Whether that comes from nature or nurture, I cannot say. Part of being optimistic is keeping one’s head pointed toward the sun, one’s feet moving forward. There were many dark moments when my faith in humanity was sorely tested, but I would not and could not give myself up to despair. That way lays defeat and death.” 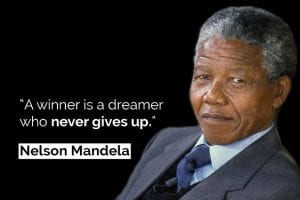 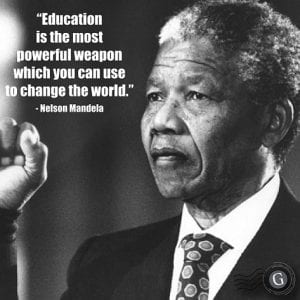 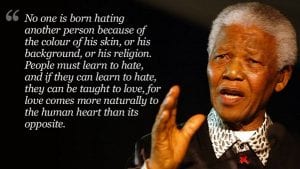