Honorary Captain Milkha Singh (20 November 1929 – 18 June 2021), also known as The Flying Sikh, was an Indian former track and field sprinter who was introduced to the sport while serving in the Indian Army. He is the only athlete to win Gold in the 400m at the Asian Games as well the Commonwealth Games. He also won gold medals in the 1958 and 1962 Asian Games. He represented India in the 1956 Summer Olympics in Melbourne, the 1960 Summer Olympics in Rome and the 1964 Summer Olympics in Tokyo. He was awarded the Padma Shri, India’s fourth-highest civilian honour, in recognition of his sporting achievements. 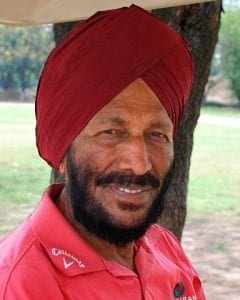 New Delhi: Legendary Indian athlete Milkha Singh has died at the age of 91. He died at 11 .30 pm. He died while undergoing treatment for the Covid disease. Covid was confirmed on May 20. He has been in the ICU since June 3 due to low oxygen levels.

At the 1958 Cardiff Commonwealth Games (then the British Empire and Commonwealth Games), Milkha Singh was the first Indian to win gold on the international track. Milkha made history in the 440—week race. Earlier, Indians had won gold at the Asian Games, but only for the title of Intercontinental Fair. He was known as the ‘Flying Sikh’.

Milkha Singh was born on 20 November 1929 and passed away on 18 June 2021. He was born in a Sikh family.[5] His birthplace was Govindpura,a village 10 km (6.25 mi) from Muzaffargarh city in Punjab Province, British India (now Muzaffargarh District, Pakistan). He was one of 15 siblings, eight of whom died before the Partition of india. He was orphaned during the Partition when his parents, a brother and two sisters were killed by Muslim mobs in the violence that ensued. He witnessed these killings.

Escaping the troubles in Punjab, where killings of Hindus and Sikhs were continuing, by moving to Delhi, India, in 1947, Singh lived for a short time with the family of his married sister and was briefly imprisoned at Tihar jail for travelling on a train without a ticket. His sister, Ishvar, sold some jewellery to obtain his release.He spent some time at a refugee camp in Purana Qila and at a resettlement colony in Shahdara, both in Delhi.

Singh became disenchanted with his life and considered becoming a dacoitbut was instead persuaded by a brother, Malkhan, to attempt recruitment to the Indian Army. He successfully gained entrance on his fourth attempt, in 1951, and while stationed at the Electrical Mechanical Engineering Centre in Secunderabad he was introduced to athletics. He had run the 10 km distance to and from school as a child and was selected by the army for special training in athletics after finishing sixth in a compulsory cross-country run for new recruits.Singh has acknowledged how the army introduced him to sport, saying that “I came from a remote village, I didn’t know what running was, or the Olympics”