New high-res #satellite imagery (10:36 am local time, August 16) of the chaotic scene underway at #Kabul’s Hamid Karzai International Airport in #Afghanistan as thousands of people converged on the tarmac & airport runways as countries attempt to evacuate personnel from the city. 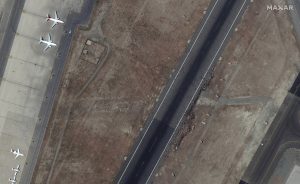 Since Sunday, the Kabul airport, the only exit point for Afghans desperate to escape another Taliban regime, has been chaotic. Five people were killed yesterday; it is unclear whether they were killed by US forces or by a stampede.
Crowds grew today as Afghan airspace was closed and the number of flights was reduced. At least two people who attempted to flee by clutching the aircraft’s wings were killed.

Maxar aerial photographs showed massive traffic jams outside the airport and crowds milling on the runway.

Many US veterans are frustrated and disappointed with how quickly the Taliban has taken control after nearly two decades of war.

“I’m now sitting here almost 20 years removed from the very event that propelled me into the military, which was the September 11 attacks,” said Matt Zeller, an Afghanistan veteran and the Association of Wartime Allies’ advisory board chair.

“And now I’m wondering if the last 20 years have been completely pointless and in vain,” he said to CNN. “What were the deaths of all my friends in Afghanistan for? What was the point of their sacrifice if this was the end result?”
“I don’t believe I’ve done anything worthwhile at this point,” he told CNN.