The International Day against Drug Abuse and Illicit Trafficking, or World Drug Day, is marked on 26 June every year, to strengthen action and cooperation in achieving the goal of a world free of drug abuse.

And each year, individuals like yourself, entire communities, and various organizations all over the world join in on this global observance, to raise awareness of the major problem that illicit drugs represent for society.

Together, we can tackle the world drug problem! 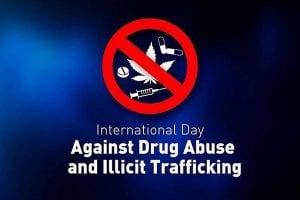 What Can You Do?

All you have to do is #ShareFactsOnDrugs to help #SaveLives.

Do your part and combat misinformation by sharing the real facts on drugs — from health risks and solutions to tackle the world drug problem, to evidence-based prevention, treatment, and care.

And you can start now. Get engaged by sharing the right facts on drugs right from our Twitter and Facebook channels.

You can also access and share our social media resources and support us in promoting the facts on drugs.

1. Avoid using cigarettes, alcohol, and drugs as alternatives to being an interesting person. Marilyn Vos Savant

2. Drugs, what a devil-inspired poison! It’s death on the installment plan.(The Cross and the Switchblade)David Wilkerson

4. Don’T Do Drugs Because If You Do Drugs You’Ll Go To Prison, And Drugs Are Really Expensive In Prison.

5. Drugs are a waste of time. They destroy your memory and your self-respect and everything that goes along with your self esteem. Kurt Cobain

6. If you’ve never tried drugs, don’t. And if you have, pray.Brad Renfro

7. I’m very serious about no alcohol, no drugs. Life is too beautiful.Jim Carrey

8. The idea that creative endeavor and mind-altering substances are entwined is one of the great pop-intellectual myths of our time.(On Writing: A Memoir of the Craft) Stephen King

9. Parents are key when it comes to keeping kids off drugs. Good parenting is the best anti-drug we have.Mel Carnahan

10. Whether you sniff it smoke it eat it or shove it up your ass the result is the same: addiction.William S. Burroughs

11. Addicts don’t like when you tell them they are all the same – Oliver Markus

The International Day Against Drug Abuse and Illicit Trafficking is a United Nations International Day against drug abuse and the illegal drug trade. It is observed annually on 26 June, since 1989. The date June 26 is to commemorate Lin Zexu’s dismantling of the opium trade in Humen, Guangdong, ending on June 25, 1839，just before the First Opium War in China. The observance was instituted by General Assembly Resolution 42/112 of 7 December 1987.

It is often referred to by Anti-Drug campaigners as 6/26. A play on Marijuana smokers “4/20” day to celebrate cannabis.

The UN’s 2007 World Drug Report puts the value of the illegal drug trade at US$322 billion a year.

Campaigns, rallies, poster designing and many other programs are conducted. People of different countries celebrate the day together. As drug use increases[citation needed], the day becomes more important.

‘Health for Justice. Justice for Health’, the theme for International Day against Drug Abuse and Illicit Trafficking 2019, highlights that “justice and health are two sides of the same coin when it comes to addressing drug problems.

Share Facts On Drugs, Save Lives The theme of the 2021 International Day Against Drug Abuse and Illicit Trafficking aims at combating misinformation and promotes sharing the facts on drugs — from health risks and solutions to tackle the world drug problem, to evidence-based prevention, treatment, and care.

The campaign highlights key statistics and data drawn from UNODC’s yearly World Drug Report. Thus, providing facts and practical solutions to the current world drug problem, to attain a vision of health for all based on science.

COVID-19 has brought unprecedented public awareness on health, protective measures for staying healthy, and most importantly, and on protecting each other. A growing sense of global community and solidarity continues to emerge, as does the need to ensure health care for all.

World Drug Day is a day to share research findings, evidence-based data and life-saving facts, to continue tapping into a shared spirit of solidarity. The campaign invites everyone to do their part, by taking a firm stance against misinformation and unreliable sources; while committing to sharing only the real science-backed data on drugs and save lives.