The singing reality show Indian Idol 12 concluded with its grand finale, which aired on Sony TV. On August 15, Indian Idol crowned its twelfth winner. Pawandeep Rajan was crowned Indian Idol 12’s winner. Additionally, he received a luxury vehicle and a reward of Rs 25 lakh. Pawandeep Rajan faced off against Arunita Kanjilal, Mohammad Danish, Shanmukh Priya, Nihal Taro, and Sayli Kamble in the finale. Vishal Dadlani, the show’s judge, stated during the show’s finale that when he first heard you, he immediately recognised him as a star performer. 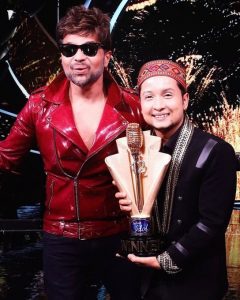 Pawandeep Rajan gave a great rocking performance. After watching Pawandeep’s performance, Sonu Kakkar says that I sincerely want you to name this trophy in your name.

Indian Idol 5 winner Shriram made a spectacular entry and told about his journey from the contestants of the show to the singer. Sriram has sung more than 500 songs so far.