The Kharg, Iran’s largest navy ship, sank in the Gulf of Oman early on June 2, 2021 after catching fire.

The fire started around 2.25 a.m. during a training mission near the port of Jask, which is a significant shipping corridor, according to Iranian media.

Fortunately, no one was hurt because the ship’s entire crew was able to escape the accident and reach safety on the coast. 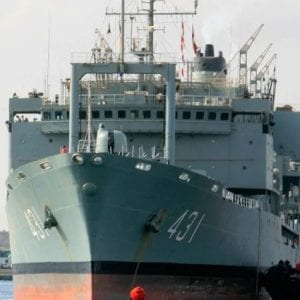 What caused the fire to start?

The cause of the fire has yet to be determined. Officials worked for about 20 hours to put out the fire, but they were unsuccessful since the flames spread to different places of the ship.

• When the fire broke out, the 680-foot fleet replenishment oiler Kharg was deployed for training operations.

• According to the Iranian Navy, the naval vessel was on a training trip in international seas when “one of its systems” caught fire.

• The ship was approaching Iran’s port of Jask, which is located in the Gulf of Oman near the Strait of Hormuz, southeast of Tehran.

• Despite the fact that military and civilian crews fought the fire for hours, all efforts to extinguish it failed, and the ship sank.

• The ship had approximately 400 crew men on board, all of whom were able to escape. According to Iranian media, 33 individuals were injured, but no one died.

• The issue is still being investigated.

The Kharg is a city in the province of Kharg

• The Kharg was Iran’s largest naval warship in terms of tonnage and one of the Iranian navy’s few resupply ships.

• It was constructed in the late 1970s in the United Kingdom.

• Before sinking, the ship had been in service for nearly four decades.

• It was one of the only warships in the Iranian navy capable of replenishing its sister ships while at sea.

• The ship may also transport big goods and function as a helicopter launch pad.

• The Kharg is the most recent in a string of calamities that have befallen the Iranian Navy in recent years.

• In 2020, an Iranian guided-missile frigate unintentionally launched a missile at one of its own ships, the Konarak support ship, killing 19 servicemen on board and injured a number of others near Jask.

• In January 2018, Iran’s massive homegrown destroyer Damavand sank completely into the Caspian Sea after being damaged while docked at Anzali Port in harsh weather. The event claimed the lives of two crew members.