How Neeraj Chopra's learning journey on YouTube prepared him for the winning medal
News Ticker
Views: 337

Every day, millions of Indians come to YouTube to learn new skills, earn a living, and transform their lives. YouTube is privileged to play a role in helping Indians achieve their dreams. An outstanding example is Neeraj Chopra.

Born into a farming family in Khandra, Haryana, his quest to excel led him to YouTube, where he watched and learnt from internationally acclaimed players throwing their javelins with absolute precision. Neeraj’s historic achievement is a source of inspiration to us all. #CreatingForIndia

Chopra participated in the 2018 Commonwealth Games and the 2018 Asian Games, serving as the flag-bearer in the latter and winning gold medals in both. In his debut at the 2020 Tokyo Olympics, Chopra won the gold medal on 7 August 2021 with a throw of 87.58 m in his second attempt. As of 2021, he is one of only two Indians to have won an individual Olympic gold medal (the other being Abhinav Bindra), as well as the youngest-ever Indian Olympic gold medalist in an individual event and the only one to have won gold in his Olympic debut 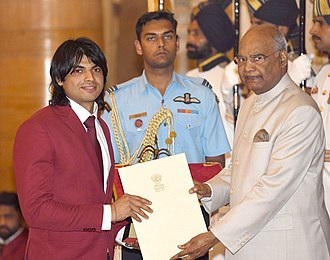 In 2015, Chopra broke the previous world record in the junior category, throwing 81.04 metres in the 2015 All India Inter-University Athletics meet; this was his first throw of over 80 metres.

Chopra finished fifth at the 2015 National Games in Kerala, and received a callback for the national-level training camp as a result, leaving Panchkula in 2016 to train at Netaji Subhas National Institute of Sports, Patiala. According to Chopra, his inclusion in the national camp marked a turning point in his career, as he received better facilities, a better quality diet and an improved standard of training from that available at Panchkula. According to him, training with national level javelin throwers boosted his morale. Chopra was also assigned his first dedicated javelin coach, 2010 Commonwealth Games bronze medallist Kashinath Naik, but found Naik’s training regimen too difficult and resumed training on his own after a month and a half.