He’s the ultimate word in song picturisation. Starting with his breakout, Mouna Ragam (1986) that tells the story of a woman (a spunky Revathi) torn between an old flame who’s shot in an unfortunate mishap moments before their court wedding and a husband she doesn’t love to O Kadhal Kanmani (2015) that updates the idea of ‘love’ for the iGeneration that prefers live-in to marriage, Ratnam’s genius is the single-minded ways in which he has put his faith repeatedly in the vagaries of human relationships. 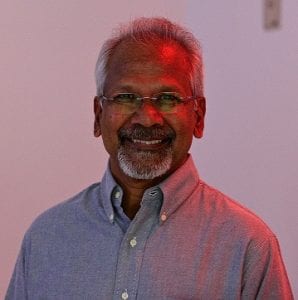 “His images sank into our souls,” writes critic Baradwaj Rangan in Conversations with Mani Ratnam describing the imprint his work has had on Kollywood fans like him that came of age in the 1980-90s.

Ratnam was the son of film producer Ratnam Iyer. He obtained a management degree at the Jamnalal Bajaj Institute of Management Studies at the University of Bombay (now the University of Mumbai) before foraying into filmmaking in the early 1980s. He made his first movie Pallavi anu pallavi in 1983. The success of Mouna ragam (1986; “A Silent Symphony”) established him as a talented director in Tamil-language cinema.

His work within the conventional parameters of commercially oriented cinema is characterized by experimentation in imagery, use of colour and lighting, and camera movement. Despite an almost surreal style characterized by soft-focus shots, flare filters, and backlit sequences, Ratnam’s art shows the heavy influence of Hollywood conventions and music videos.

Hollywood’s influence is clearly reflected in what is often considered his greatest film: Nayakan (1987), a skillful reworking of Francis Ford Coppola’s The Godfather (1972) based on the life of Mumbai underworld don Varadarajan Mudaliar. The style of music videos was a strong influence on Agni nakshatram (1988), Gitanjali (1989), and Anjali (1990).

Beginning in the 1990s, Ratnam’s films examined political issues. Roja (1992) dealt with terrorism in Kashmir. Its score was the first written by composer A.R. Rahman, who worked on many of Ratnam’s later films. Bombay (1995) depicted the 1992–93 sectarian riots that rocked the title metropolis following the demolition of the Babri Masjid (“Mosque of Bābur”) in Ayodhya by Hindu nationalists. In his first Hindi-language movie, Dil se.. (1998), a radio reporter falls in love with a woman trained as a suicide bomber.

The Tamil-language film Kannathil muthamittal (2002; A Peck on the Cheek) is set in war-torn Sri Lanka and is about an adopted girl searching for her birth mother.

Yuva (2004) saw Ratnam return to Hindi-language cinema after six years. Ratnam also simultaneously made a Tamil-language version of Yuva, Ayitha Ezhuthu, with a different cast. His next film, the Tamil-language Guru (2007), was set in the 1950s and was based on the rise to fortune of tycoon Dhirubhai Ambani.

The Hindi-language Raavan (2010) and its simultaneously shot Tamil version, Raavanan, were contemporary versions of the Ramayana. Ratnam’s later films included the romantic OK kanmani (2015; also known as O kadhal kanmani) and Chekka chivantha vaanam (2018), about a power struggle in a crime family; both were in Tamil. He received the prestigious Padma Shri award, one of India’s highest civilian honours, in 2002.