People in Hyderabad woke up to a rare phenomenon of a big hallow ring around the sun on Wednesday.

From morning walkers to homemakers, everyone was trying to catch the glimpse of the unique spectacle in the sky. Some people tried to film it on their mobile phones and some tried to take a selfie with sun halo in the backdrop. A similar phenomenon was noticed in Bengaluru a few days ago. 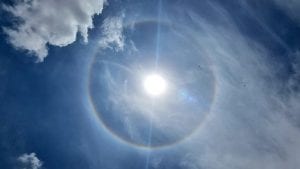 According to experts, the halos are caused by both refraction, or splitting of light, reflection, or glints of light from these ice crystals which are in a hexagonal shape. “Around monsoon or spring season, not an actual rainbow but a coloured ring forms accidentally or coincidentally, they are made up of same size particles. One can see a dispersion of light reflecting seven colors in the sky around the sun,” said BG Sidharth, Director, BM Birla Science Centre, Hyderabad.

What is a Sun halo?

Sun halo, also known as ‘22 degree halo’, is an optical phenomenon that occurs due to sunlight ref racting in millions of hexagonal ice crystals suspended in the atmosphere. It takes the form of a ring with a radius of approximately 22 degrees around the sun or the moon.

Where the halos are formed?

Circular halos specifically are produced by cirrus clouds, which are thin, detached, hair-like clouds. These clouds are formed very high up in the atmosphere, at a height of over 20,000 feet.

What causes a sun halo to appear?

The halo phenomena happen when the light is reflected and refracted by ice crystals and may split into colours because of dispersion, according to the UK based Atmospheric Optics, a knowledge-sharing website. It further explained that the crystals behave like prisms and mirrors, refracting and reflecting light between their faces, sending shafts of light in particular directions. Atmospheric optical phenomena like halos were used as part of weather lore, which was an empirical means of weather forecasting before meteorology was developed. They often do

indicate that rain will fall within the next 24 hours, since the cirrostratus clouds that cause them can signify an approaching frontal system.

How can one view a halo?

Just like a rainbow, a halo is visible when viewed from the right angle – sometimes appearing just white but often with colours of the spectrum also clearly present. They are the collective glints of millions of crystals that happen to have the right orientation and angular position Qirect their refracted light into your eye.

How often do sun halos occur?

A senior IFS officer Ramesh Pandey said that such Sun or Moon halos are not so common. However they have been witnessed earlier in the country in the past, he added. Such a halo could occur around the moon at night, which is formed due to the same phenomenon.