New Delhi: Anger and rage erupted on Twitter after a Google search for the “ugliest language in India” yielded Kannada as the result. This has sparked a heated debate on the micro-blogging site, as Google has named Kannada the “Queen of Languages in the World.” Because of this double standard, Kannadigas are unsure what Google truly thinks of their beloved language.

TS Nagabharana, President of Kannada Development Authority, told TV9 Kannada Digital, “We have gotten into a legal battle over this issue.” Google was served with a legal notice condemning Kannada. Humiliation of one another in terms of land, water, language, and culture is unacceptable. Clearly, this is a well-planned conspiracy. 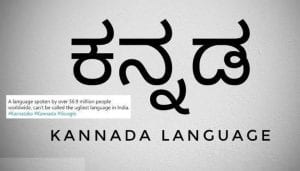 Been seeing many posts regarding google showing ugliest language is kannada. We respect our language and our language is the oldest language which is 2500 years (aprox) old. So requesting my dear #kannadaigas to type out Queen of languages in the world. It shows #Kannada pic.twitter.com/Lw6oGocjxO

Home to the great Vijayanagara Empire, #Kannada language has a rich heritage, a glorious legacy and a unique culture. One of the world’s oldest languages Kannada had great scholars who wrote epics much before Geoffrey Chaucer was born in the 14th century. Apologise @GoogleIndia. pic.twitter.com/Xie927D0mf

Report it with desktop mode .
Respect all languages.
Kannada is one of the oldest and beautiful languages @Google #Kannada pic.twitter.com/mGmUJ3oTEo

Kannada doesn’t belong to Kannadiga’s alone, it belongs to South India,we Tamils may have differences with Kannadiga but they are our brothers and we will support Kannada, many Tamils live in Karnataka and many Kannadigas live in Tamil Nadu #Kannada

ನಮ್ಮ ಕನ್ನಡ, ನಮ್ಮ ಹೆಮ್ಮೆ 💛❤️
It’s the language with history of 2500+ years !!!
Respect Kannada, it isn’t the ugliest language
It’s the most beautiful language you can come across ❤️
It’s queen of all languages💛#queenoflanguages
#Kannada #ಕನ್ನಡ #ShameOnYouGoogle

Kannadigars, Kannada language moods, are ambushed to create such an opportunity. It is not our responsibility to resist. These types of events, on the other hand, must be kept in check. Kannadigas believes that “we should not be afraid to confront even the most minor issues that affect us.”