Google Paid Tribute to Margherita Hack with Doodle on her Birthday

Margherita Hack Knight Grand Cross OMRI 12 June 1922 – 29 June 2013) was an Italian astrophysicist and scientific disseminator. The asteroid 8558 Hack, discovered in 1995, was named in her honour. On 12 June 2021, Google celebrated her with Google Doodle on her 99th birthday. 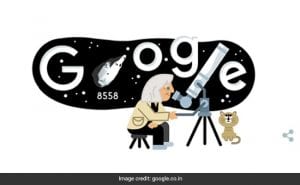 Both parents had left their religion of provenance to join the Italian Theosophical Society, for which Roberto Hack was secretary for a certain period under the chairmanship of the countess Gamberini-Cavallini.

Margherita Hack, after attending (without taking exams because of the outbreak of World War II) the Liceo Classico “Galileo Galilei” in Florence, graduated in physics from the University of Florence in 1945 with test score of 101/110, with a thesis in astrophysics on Cepheid variables, after studies made in the Arcetri Observatory at those times under the direction of Giorgio Abetti, that was for her a model of scientist, teacher and scientific research centre administrator.

In her youth, in addition to basketball, she practiced with success athletics, in which obtained victories in the long jump and the high jump at university championships, named Littoriali under the fascist regime.

On 19 February 1944 married with religious ceremony, in the church of San Leonardo in Arcetri, Aldo De Rosa, one of her playmates when they were kids.

In Italy, she was specially known for her anti-religious views and her continual criticism of the Catholic Church and of its hierarchy and institutions.

She was a vegetarian and has written a book explaining this choice entitled Perché sono vegetariana (Why I Am A Vegetarian).

Hack died in Trieste on 29 June 2013 at 04:30 at Cattinara hospital, after being hospitalized for a week for heart problems, from which she suffered from about two years. She had refused to have heart surgery.

The husband, Aldo De Rosa, died on 26 September 2014, due to complications of the Alzheimer disease. They both rest in the cemetery of Sant’Anna di Trieste.

She left to the city of Trieste her personal library containing 24000 books on astronomy.

1.  “Us atheist people, we believe we have to act properly and honestly for a moral principle and not because we expect an award in Paradise.”
― Margherita Hack

2. “Eva’s only fault has been the one of wanting to know more, to experiment and search with her own sources the laws of the Universe, of her own body and to refuse the teachings from “above”. Eva, basically, represents the curiosity of science against the passive acceptance that belongs to faith.”
― Margherita Hack

3. “Spirituality, for someone like me who doesn’t believe in God, in the existence of soul, in something after-death, is the capacity to love and to understand others – humans, and animals – is the capacity to not do to others what you don’t want other people to do to you.”
― Margherita Hack

4. “It’s not God who gave us moral laws, but this doesn’t make them less important”
― Margherita Hack

5. “I think our brain is our soul. I don’t believe in after-life and much less in a sort of buildings-like heaven, where you meet friends, enemies, relatives.”
― Margherita Hack

She was important because she decided to follow her passion for astronomy and in 1964 she became a full time astronomy professor at the University of Trieste, which se remained until she retired in 1998. During her liftime she wrote academic science books as well as articles for prestigious international astronomy magazines.

In 1978 she founded the bimonthly magazine “L’Astronomia” (The Astronomy) and later on, together with Corrado Lamberti she directed the scientific magazine “Le Stelle” (The Stars).

She was full professor of astronomy at the University of Trieste from 1964 to 1° November 1992, when she was placed “out of role” for seniority. She has been the first Italian woman to administrate the Trieste Astronomical Observatory from 1964 to 1987,bringing it to international fame.

Member of the most prestigious physics and astronomy associations, Margherita Hack was also director of the Astronomy Department at the University of Trieste from 1985 to 1991 and from 1994 to 1997. She was a member of the Accademia Nazionale dei Lincei (national member in the class of mathematical physics and natural sciences; second category: astronomy, geodesic, geophysics and applications; section A: astronomy and applications).She worked at many American and European observatories and was for long time member of working groups of ESA and NASA.In Italy, with an intensive promotion work, she obtained the growth of activity of the astronomical community with access to several satellites, reaching a notoriety of international level.

She has published several original papers in international journals and several books both of pupular science and university level. In 1994 she was awarded with the Targa Giuseppe Piazzi for the scientific research, and in 1995 with the Cortina Ulisse Prize for scientific dissemination.

In 1978 Margherita Hack founded the bimonthly magazine L’Astronomia whose first issue came out in November 1979;later, together with Corrado Lamberti, she directed the magazine of popular science and astronomy culture Le Stelle.

For the nuclear research

Regarding the energy issue, Margherita Hack spoke against the construction of nuclear power stations in Italy, but in favour of the nuclear research, explaining that Italy was not at that time able to maintain nuclear reactors and that Italy is a scarcely reliable country.