Badlapur: A gas leak from a company in an industrial estate in Badlapur around 10 pm on " />
News Ticker
Views: 593

Badlapur: A gas leak from a company in an industrial estate in Badlapur around 10 pm on Thursday took the breath away of citizens in the eastern Shirgaon, Aptewadi, Dattawadi, Katrap and Gavdevi temple areas. The realm of air was spread in this area. Even after closing the doors and windows, the citizens felt nausea, shortness of breath, wheezing and nausea. This type had caused a single commotion among the citizens for an hour. 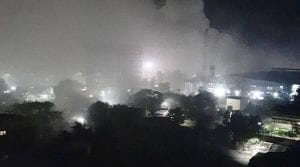 Around 10 pm on Thursday, an air leak occurred from Global Intermediate Pvt Ltd in Badlapur East. The company was processing raw materials for making animal feed. Kulgaon Badlapur fire brigade official Bhagwat Sonone said that the gas was spread due to high levels of sulfur being mixed in the crude oil metanitrobenzyme dehydrate.

Large amount of air was spread in Shirgaon, Aptewadi, Dattawadi, Katrap, Gavdevi temple areas east of Badlapur. The amount of this gas was such that the Badlapur-Karjat state highway had disappeared. The citizens immediately closed the windows and doors of the house due to the strange chemical smell.

But even after that, the pride of the area was intense. Many citizens were having difficulty breathing due to this gas. Many have itchy eyes, coughing, Citizens felt nauseous and vomiting. Badlapur fire brigade personnel rushed to the spot after getting information about the incident.

Within minutes the company managed to get the gas leak under control. But by midnight, I was feeling the air. No casualties were reported from the leak until late at night, firefighters said. Fortunately, a major catastrophe was averted due to an air leak while the citizens were still awake.