Gandhi Jayanti is an event celebrated in India to mark the birth anniversary of Mahatma Gandhi. It is celebrated annually on 2 October, and it is one of the three national holidays of India.

The UN General Assembly announced on 15 June 2007 that it adopted a resolution which declared that 2 October will be celebrated as the International Day of Non-Violence. 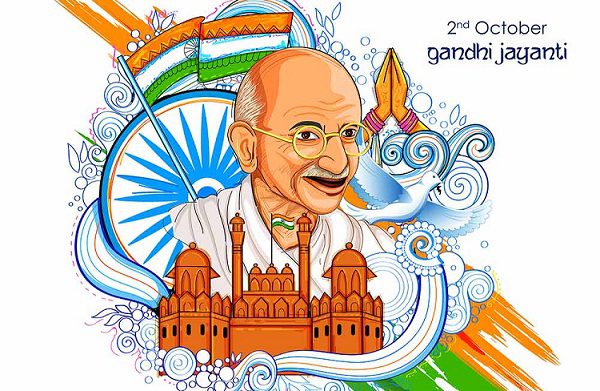 Gandhi Jayanti is marked by prayer services and tributes all over India, including at Gandhi’s memorial Raj Ghat in New Delhi where he was cremated. Popular activities include prayer meetings, commemorative ceremonies in different cities by colleges, local government institutions and socio-political institutions. Painting and essay competitions are conducted and best awards are granted for projects in schools and the community encouraging a non-violent way of life as well as celebrating Gandhi’s effort in the Indian independence movement.

Gandhi’s favourite Bhajan (Hindu devotional song), Raghupati Raghav Raja Ram, is usually sung in his memory. Statues of Mahatma Gandhi throughout the country are decorated with flowers and garlands, and some people avoid drinking alcohol or eating meat on the day. Public buildings, banks and post offices are closed

What do People do?

Many people celebrate Mahatma Gandhi’s birthday across India. Events include:

• Prayer services, commemorative ceremonies and tributes at locations all over India.

• The presentation of awards to projects stimulating a non-violent way of life.

• The showing of films and book readings on Mahatma Gandhi’s life and achievements.

Mahatma Gandhi, also known as Mohandas Karamchand Gandhi, was born on October 2, 1869, and died on January 30, 1948. He was a political and spiritual leader in India and played a key role in the Indian independence movement. Gandhi developed the novel technique of non-violent agitation, which he called “Satyagraha”, loosely translated as “moral domination”.

He is known for his non-violent civil disobedience in India and South Africa. These included the start of the non-cooperation movement in 1922 and the Salt Satyagraha or Salt (Dandi) March starting on March 12, 1930. Through Gandhi’s efforts, India finally gained its freedom on August 15, 1947. The nation mourned for him after he was assassinated on January 30, 1948. The United Nations’ (UN) International Day of Non-Violence is also held on October 2 each year to coincide with Mahatma Gandhi’s birthday

Three locations in India play important roles in the celebrations of Mahatma Gandhi’s birthday. These are:

1. The Martyr’s Column at the Gandhi Smriti in New Dehli where Mahatma Gandhi was shot on January 30, 1948.

2. The Raj Ghat on the banks of the river Yamuna in New Dehli where Mahatma Gandhi’s body was cremated on January 31, 1948.

3. The Triveni Sangam where the rivers Ganga, Yamuna and Saraswati come together near Allahabad.

• “You must be the change you wish to see in the world.”

• “The Bhagavad-Gita calls on humanity to dedicate body, mind and soul to pure duty and not to become mental voluptuaries at the mercy of random desires and undisciplined impulses.”

• “There is more to life than increasing its speed.”

• “The only devils in this world are those running around in our own hearts, and that is where all our battles should be fought.”

• “I find a solace in the Bhagavad-Gita that I miss even in the Sermon on the Mount. When disappointment stares me in the face and all alone I see not one ray of light, I go back to the Bhagavad-Gita. I find a verse here and a verse there , and I immediately begin to smile in the midst of overwhelming tragedies — and my life has been full of external tragedies — and if they have left no visible or indelible scar on me, I owe it all to the teaching of Bhagavad-Gita.”