Free Fire’s (FF) OB28 update is scheduled to release on June 8, 2021. This new update will bring many new changes to the game, such as a new character, new pet, new mechanisms, and much more. This post will share the official patch notes of the OB28 update coming this Tuesday.

Similar to the previous OB update, before the release of the OB28 update, the servers will also be taken down to smoothening the process of adding new features to the game mechanism. On June 8, 2021, the maintenance break for the OB28 patch update shall be from 09:00 AM IST to 04:30 PM IST. During this period, players will not be able to log in and play the game. 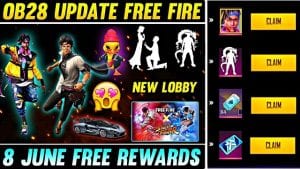 “Clash Squad Season 7 is here! Rank up to Gold III or above to receive the Clash Squad exclusive item – The Golden M1014”

Also being added a new rank “Grandmaster” on the Clash Squad. Players must challenge themselves to be among the top 1000 Master players to earn the Challenging Badge! In addition, the new ranked season is available from June 9, 2021, to August 5, 2021.

New rank: the top 1000 master players will now be promoted to “Grandmaster”.

 Loot and purchase limit adjustment.
“We’re adding more items to the vending machine so that it has enough items to meet battle needs. We’re also adding personal purchase limits on some of the consumables and more valuable items to prevent players from accumulating utilities at the end of the game. “

 Optimized the “loot” in the ground so that it doesn’t overlap the vending machine.

“Reviving teammates through the return areas isn’t as challenging as expected. We’re increasing the difficulty of capturing the return areas to ensure that every revive in Battle Royale comes at a cost.”

“Since we introduced the revive system in ranked mode, we’ve realized that the difficulty of getting rank points has become significantly more difficult because opponents now have opportunities to return to the battlefield. highly ranked to ensure that the overall difficulty of moving up ranks is a little less than before.”

“We are adding more features to Training Island in this update based on player feedback. First, we are increasing the capacity of Training Island so that players can meet with more players. We are also adding some social features, including Emojis, leaderboards, and a lap timer on the race track. Participate and check it out!”

“The early access of the Pets Spree was very well received by players in the last update. We’re making this mode available to all players via matchmaking right after the update so everyone can queue up and have fun! Plus, we’ve added 4 mini-games for the games! scientists complete, tell us which one is your favorite!”

“Introducing the Ice Grenade, a utility grenade that will explode and leave an aura that deals damage over time after it explodes. The Ice Grenade will be a good tool to force enemies out of hiding.”

Initially, check out the stats and how the new Free Fire Ice Grenade works: