Frank Kameny Features on Google Doodle : Franklin Kameny, the “father of the Gay Rights Movement,” intended to be an astronaut, not an activist. After receiving a PhD in Astronomy from Harvard University, Kameny went to work for the Army Map Service (the precursor to NASA). His employment with the federal government, however, was short lived. He was fired in 1957 by the U.S.

Civil Service Commission for his suspected homosexuality, refusing to answer questions about his sexuality when questioned by his superiors. In 1953, President Dwight Eisenhower had issued Executive Order 10450, that essentially established who could receive a federal security clearance. The order named as security risks Communists, subversives, drunks and drug users, and “sexual perverts.”

His career derailed, Kameny got radical, beginning his work as an activist by appealing his firing, going so far as writing a petition to the Supreme Court, which declined to consider his case. Kameny’s petition, however, was the first civil rights case based on sexual orientation filed in a U.S. court.

In 1961, along with fellow activist Jack Nichols, Kameny started a Washington, D.C. branch of the Mattachine Society, an early homophile organization, founded in Los Angeles in 1950. Mattachine Washington organized some of the first protests against the federal government for gay rights, including a picket of the White House on April 17th of 1965. Mattachine Washington also helped to coordinate an annual picket at Philadelphia’s Independence Hall, the site where the Declaration of Independence and the U.S. Constitution were signed. These pickets were known as the Annual Reminder, as a representation of the fact that gays did not possess first-class American citizenship. Following the Stonewall Inn Riots of 1969, the Annual Reminder was refashioned into Christopher Street Liberation Day, a precursor to today’s modern Pride celebrations. 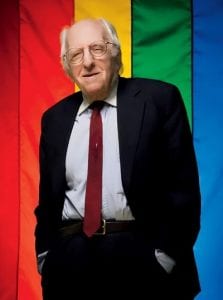 Kameny was the most conventional of men, focused utterly on his work, at Harvard and at Georgetown… He was thus all the more rudely shocked when the same fate befell him as we’ve seen befall Prescott Townsend, class of 1918, decades before… He was arrested. Later he would be fired. And, like Townsend, Kameny was radicalized.

Kameny appealed his firing through the judicial system, losing twice before seeking review from the United States Supreme Court, which turned down his petition for certiorari. After devoting himself to activism, Kameny never held a paid job again and was supported by friends and family for the rest of his life. Despite his outspoken activism, he rarely discussed his personal life and never had any long-term relationships with other men, stating merely that he had no time for them. He stated, “If I disagree with someone, I give them a chance to convince me they are right. And if they fail, then I am right and they are wrong and I will just have to fight them until they change.”

Kameny eschewed conventional racial designations; throughout his life, he consistently cited his race as “human”.

In 1961, Kameny and Jack Nichols, fellow co-founder of the Washington, D.C., branch of the Mattachine Society, launched some of the earliest public protests by gays and lesbians with a picket line at the White House on April 17, 1965. In coalition with New York’s Mattachine Society and the Daughters of Bilitis, the picketing expanded to target the United Nations, the Pentagon, the United States Civil Service Commission, and Philadelphia’s Independence Hall for what became known as the Annual Reminder for gay rights. Kameny also wrote to President Kennedy asking him to change the rules on homosexuals being purged from the government.

In 1963, Kameny and Mattachine launched a campaign to overturn D.C. sodomy laws; he personally drafted a bill that finally passed in 1993.[15] He also worked to remove the classification of homosexuality as a mental disorder from the American Psychiatric Association’s Diagnostic and Statistical Manual of Mental Disorders.

Unlike other homosexual activists at the time, Kameny rejected the idea that homosexuality was inferior to heterosexuality:

I do not see the NAACP and CORE worrying about which chromosome and gene produced a black skin, or about the possibility of bleaching the Negro. I do not see any great interest on the part of the B’nai B’rith Anti-Defamation League on the possibility of solving problems of anti-semitism by converting Jews to Christians . . . We are interested in obtaining rights for our respective minorities AS Negroes, AS Jews, and AS HOMOSEXUALS. Why we are Negroes, Jews, or Homosexuals is totally irrelevant, and whether we can be changed to Whites, Christians, or heterosexuals is equally irrelevant.