Independence Day (colloquially the Fourth of July) is a federal holiday in the United States commemorating the Declaration of Independence of the United States, on July 4, 1776. The Continental Congress declared that the thirteen American colonies were no longer subject (and subordinate) to the monarch of Britain, King George III, and were now united, free, and independent states. The Congress had voted to declare independence two days earlier, on July 2, but it was not declared until July 4.

Independence Day is commonly associated with fireworks, parades, barbecues, carnivals, fairs, picnics, concerts, baseball games, family reunions, political speeches, and ceremonies, in addition to various other public and private events celebrating the history, government, and traditions of the United States. Independence Day is the national day of the United States.

• In 1777, thirteen gunshots were fired in salute, once at morning and once again as evening fell, on July 4 in Bristol, Rhode Island. An article in the July 18, 1777 issue of The Virginia Gazette noted a celebration in Philadelphia in a manner a modern American would find familiar: an official dinner for the Continental Congress, toasts, 13-gun salutes, speeches, prayers, music, parades, troop reviews, and fireworks. Ships in port were decked with red, white, and blue bunting.

• In 1778, from his headquarters at Ross Hall, near New Brunswick, New Jersey, General George Washington marked July 4 with a double ration of rum for his soldiers and an artillery salute (feu de joie). Across the Atlantic Ocean, ambassadors John Adams and Benjamin Franklin held a dinner for their fellow Americans in Paris, France.

• In 1781, the Massachusetts General Court became the first state legislature to recognize July 4 as a state celebration.

• In 1783, Salem, North Carolina, held a celebration with a challenging music program assembled by Johann Friedrich Peter entitled The Psalm of Joy. The town claims it to be the first public July 4 event, as it was carefully documented by the Moravian Church, and there are no government records of any earlier celebrations.

• In 1870, the U.S. Congress made Independence Day an unpaid holiday for federal employees.

• In 1938, Congress changed Independence Day to a paid federal holiday.

1. Happy 4th of July! Wishing you a joyful and prosperous holiday!

2. Happy Fourth of July! Celebrate the peace and commemorate the heroes!

3. Wishing you and your family a meaningful and blessed Fourth of July!

4. Happy 4th of July! May this day of independence bring our country peace and prosperity. Celebrate freedom and have a good day!

5. Sending best wishes and blessings your way on the occasion of the 4th of July! May this day be a new beginning of peace, happiness, and prosperity!

6. The American flag shall always soar. Have a great Fourth of July!

7. Happy Fourth of July to all! May this day be a symbol of peace, prosperity, and happiness in your lives. God bless America and the people who live here!

8. I wish you and your family a happy Fourth of July!

9. Happy Independence Day to all American! Let’s appreciate our beautiful country on this day.

11. On this significant day, let us memorize and celebrate the heroes to whom we owe our freedom, peace, and happiness! Happy 4th of July to you!

12. Happy Fourth of July! I wish you a joyous and pleasant celebration of this momentous occasion.

13. On this special day, may you have a shining celebration. I wish you a happy Fourth of July!

14. May this day be a source of prosperity, love, and joy for you. Have a wonderful Fourth of July!

15. Let us all salute the American spirit. Happy Fourth of July!

16. Happy Fourth of July, everyone. A million salutes to America’s brave men and women.

17. Happy Fourth of July to my brothers and sisters! Let’s feel the pride of being Americans in our hearts and enjoy our freedom!

18. Happy Fourth to you all! Feel the patriotism in your heart, smile with kindness, and spread love equally! May you be blessed!

19. Happy Fourth of July! Let’s pay our respect to those who have shed their blood and sweat to make America a better place to live in!

20. Rejoice in the freedom and unite in brotherhood! Happy Fourth of July! 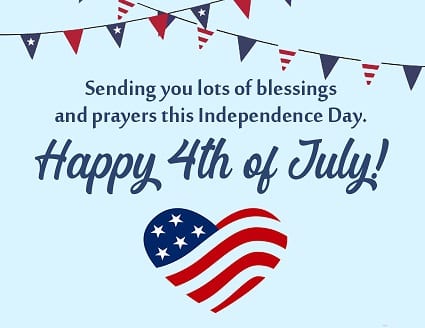 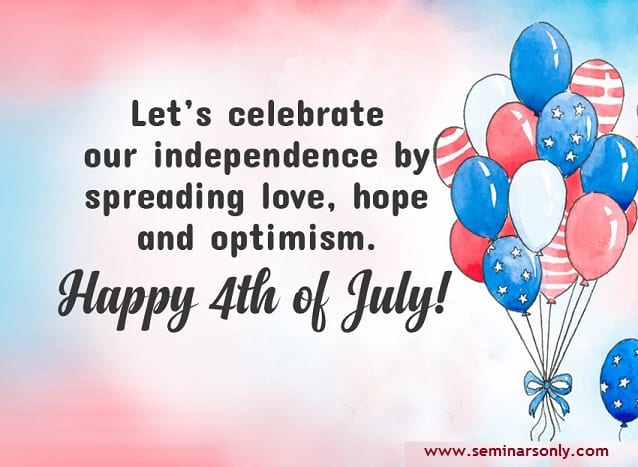 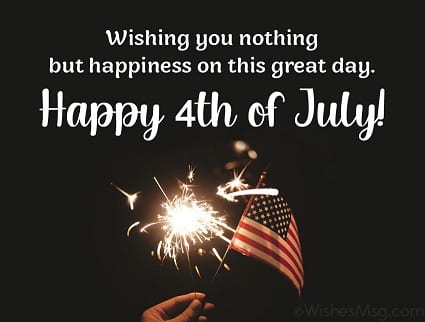