Forecasters predict more than a foot of snow will fall across the region during the upcoming winter storm.

The National Weather Service predicts that a major winter storm moving north from the Carolinas will bring steady snow – occasionally heavy – to the region on Sunday night and Monday. The rest of Sunday is expected to be clear.

The Weather Service predicts more than a foot of snow for the western counties.

Starting Sunday across Western New York, winter storm warnings will be in effect for various lengths of time and with different snowfall totals depending on where you live.

After 1 p.m., wind chill advisories will also be in effect across the area. There is a chance tonight’s wind chill values will not meet the advisory criteria of 15 degrees below zero due to decreased wind speeds, the Weather Service said in a forecast discussion this morning. However, advisories could be issued later should conditions change, as temperatures are expected to fall between zero and five degrees below zero.

For Wyoming, Chautauqua, Cattaraugus, and southern Erie counties, the National Weather Service has issued the most severe winter storm warnings, stating that 12 to 18 inches of snow is possible.

In anticipation of the impending winter storm that will sweep across a large portion of the United States over the next few days, road crews are pre-treating major thoroughfares, airlines are warning of travel delays and shoppers are stocking up on supplies.

Southwest Airlines has issued a travel advisory for parts of the Midwest for Friday and Saturday, and has announced that it will waive change fees for flights to, from, or through Des Moines, Kansas City, Minneapolis, Omaha, and St. Louis airports during that time period as well.

The Weather Channel referred to the storm as “Izzy.”

The Weather Service has predicted 40mph winds to accompany the snowfall. 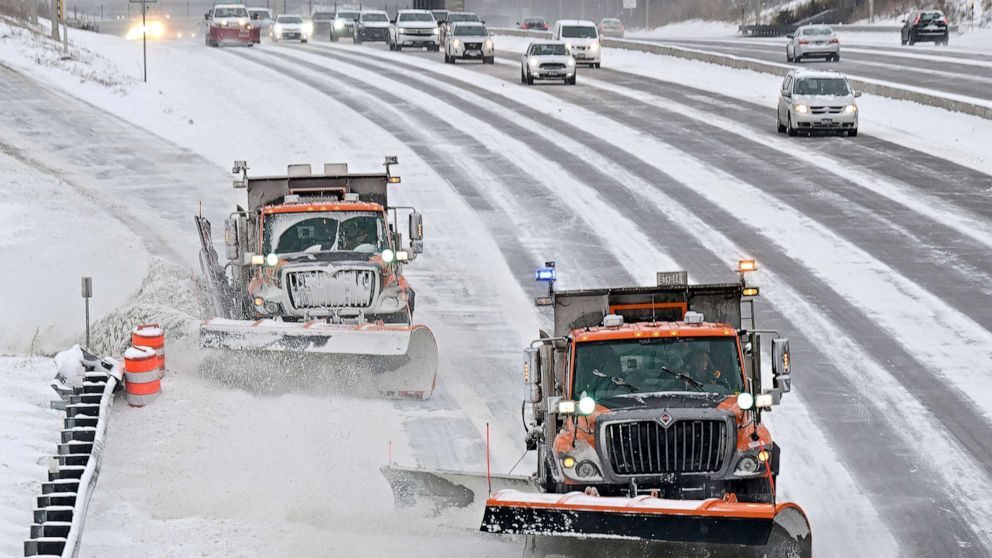 Genesee, Orleans, Niagara, and northern Erie counties will be under a winter storm warning from 9 p.m. Sunday to 7 p.m. Monday.

In addition to heavy snowfall, 12 to 18 inches of snow are expected to accumulate in the area. According to the Weather Service, wind gusts could reach 40 mph.

Travel will be hazardous if snow accumulates across a large area. Sunday night through Monday night, travel could be extremely difficult to impossible. The morning and evening commutes on Monday will be particularly difficult because of the hazardous conditions.

Those areas are under a wind chill advisory until 1 p.m. this afternoon. A 15-degree below-zero wind chill is possible, according to the National Weather Service.