Police officers with pistols drawn and a nearly-disabled car were unable to keep up with the chase suspect, who drove away and attempted various PIT manoeuvres in the second chase.

During a wild car chase that began south of downtown Los Angeles, the suspect reportedly was driving a stolen vehicle the wrong way down a busy Orange County interstate and down many streets in southern Los Angeles County.

There was no immediate information on the car theft. On Friday morning, police in Downey, California, verified that the vehicle had been taken in a probable carjacking.

While driving on Interstate 5 south of downtown Los Angeles, a Honda Civic sedan driver exited on to Bell Gardens streets. On the 5 Freeway and into Orange County, the pursuit continued.

Beach Boulevard officers utilised a PIT technique to spin the driver’s automobile after he left the motorway. He drove via Fullerton, Buena Park, and La Mirada before driving back into southern Los Angeles County.

At least one car was almost hit head-on by a driver who was driving on the wrong side of the road in the Santa Fe Springs region, before he nearly smashed into the side of a truck at a junction. 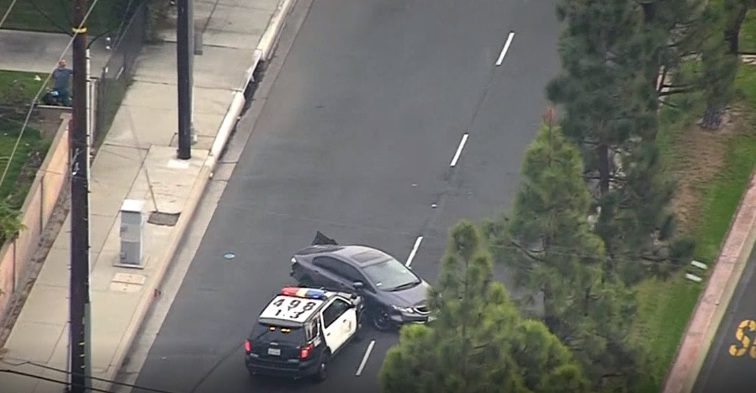 A tyre may have been damaged by at least two spike strips. At one point, the driver crossed the street and onto the sidewalk in order to avoid an immobile pickup truck.

After three more attempts at the PIT technique, the driver finally came to a halt near Bloomfield Avenue and Del Amo Boulevard. Officers appear to have the automobile blocked after a standoff ensued.

Officers used repeated PIT manoeuvres during the second pursuit, and the vehicle crossed the median at least once into oncoming traffic.

The man eventually surrendered when officers put him on the ground. Injuries have not been determined, but police say he was brought to a nearby hospital.