According to recent reports, acting VC PC Joshi of Delhi University stated that the university will adjust its admission process to meet current needs and circumstances without compromising on merit. The announcement came following the cancellation of the CBSE class 12 board exams. Additionally, the VC stated that the Central University Common Entrance Test may be an appropriate method for administering the exams.

After the CBSE and CISCE announced their decision to cancel the class 12 board exams due to the pandemic, the Vice Chancellor of Delhi University stated that discussions will be held with the university’s admission committee and academic council to finalise the undergraduate admissions process. Nearly 98 percent of Delhi University’s undergraduate applicants are CBSE students. 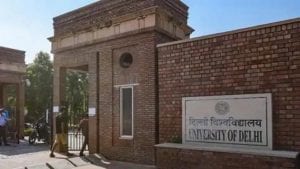 CUCET is an excellent method of student admissions.

Additionally, the Vice Chancellor stated that there will be a method for determining students’ merit under such circumstances, and the CUCET may be an appropriate method because it will be based on pan-India merit. He also stated that DU will not compromise on merit and will adapt to the new situation by developing a method and waiting for the board’s criteria for evaluating students.

DU applauds the decision to postpone the class 12 examination.

Professor Sanjeev Singh, Joint Director of the Delhi University Computer Centre, stated that once the Education Ministry issues guidelines, the university will likely admit students based on CUCET scores.