“Christian Eriksen is awake and is for further examinations at Rigshospitalet. The match is temporarily postponed. New message comes at 19.45,” the translated version of the tweet said. 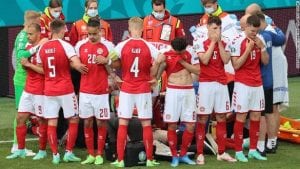 Play was instantly halted as medical personnel rushed onto the field to assess the situation. While the match was delayed for several minutes, Danish players formed a ring around Eriksen as he got crucial and quick medical care.

Eriksen appeared to be receiving CPR and electric shocks from the medical team, according to what was shown on television.

As players from both sides left, he was stretchered off the ground. All the time, the Danish players stayed close to Eriksen.

How To Activate New iPhone : Activate and Setting Up Your Device

The match has been suspended, according to a tweet from UEFA.

“Due to a medical issue, the UEFA EURO 2020 match in Copenhagen has been suspended,” the message read.

The match was later rescheduled, according to UEFA.

“UEFA has decided to restart the match between Denmark and Finland tonight at 20:30 CET (TBC) following a request from both teams’ players,” the tweet stated.

After that, UEFA announced that five minutes would be played at the end of the first half, followed by a 5-minute half-time break before the second half.

Eriksen’s Danish teammates erected a wall around him as he collapsed, shielding the Inter Milan player from view as he was being treated. While Eriksen was being treated by doctors, players from both sides, as well as supporters in the stadium, were obviously worried.

In an earlier tweet, UEFA stated, “The UEFA EURO 2020 match in Copenhagen has been suspended owing to a medical issue.”

After several minutes on the pitch, Eriksen was stretchered off, shielded from view by medics holding up blankets.
According to journalist Mattias Karen, inside the stadium, Finnish fans began screaming “Christian,” to which all Danish fans responded “Eriksen.”