Canada Day (French: Fête du Canada) is the national day of Canada. A federal statutory holiday, it celebrates the anniversary of Canadian Confederation which occurred on July 1, 1867, with the passing of the Constitution Act, 1867 where the three separate colonies of Canada, Nova Scotia, and New Brunswick were united into a single Dominion within the British Empire called Canada. 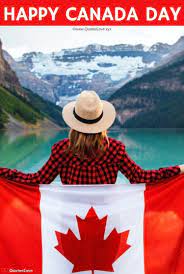 Originally called Dominion Day (French: Le Jour de la Confédération), the holiday was renamed in 1982 when the Canadian Constitution was patriated by the Canada Act 1982. Canada Day celebrations take place throughout the country, as well as in various locations around the world attended by Canadians living abroad

Today’s Doodle celebrates Canada Day, previously known as “Dominion Day.” On this day in 1867, the British North American act joined the three individual territories of Canada, Nova Scotia, and New Brunswick to form the unified Dominion of Canada. With the Canada Act of 1982, the country gained complete independence from Britain, and the observance was officially renamed Canada Day (Fête du Canada).

Across the 13 provinces and territories that comprise Canada today, annual celebrations include parades, fireworks displays, and the prominent display of the national colors of red and white. These colors adorn national symbols including the coat of arms and national flag. In today’s Doodle artwork, the latter of these can be seen clutched by another well-known Canadian ambassador: the beaver.

As the emblematic species first appeared on a Nova Scotian coat of arms in 1621, this semi-aquatic animal has been a representative of the North American nation longer than the maple leaf! Today, the beaver is protected by the 1975 National Symbol of Canada act and extensive conservation efforts, allowing the population of millions to thrive “A Mari usque ad Mare”—Canada’s official Latin motto, which translates to “from to sea to sea.”