Bastille Day is the common name given in English-speaking countries to the national day of France, which is celebrated on 14 July each year. In French, it is formally called Fête nationale (pronounced [fɛt nɑsjɔnal]; “National Celebration”) and commonly and legally le 14 juillet (“the 14th of July”).

The French National Day is the anniversary of the Storming of the Bastille on 14 July 1789, a major event of the French Revolution,[4] as well as the Fête de la Fédération that celebrated the unity of the French people on 14 July 1790. Celebrations are held throughout France. One that has been reported as “the oldest and largest military parade in Europe”[5] is held on 14 July on the Champs-Élysées in Paris in front of the President of the Republic, along with other French officials and foreign guests.

In 1789, tensions rose in France between reformist and conservative factions as the country struggled to resolve an economic crisis. In May, the Estates General legislative assembly was revived, but members of the Third Estate broke ranks, declaring themselves to be the National Assembly of the country, and on 20 June, vowed to write a constitution for the kingdom.

On 11 July Jacques Necker, the Finance Minister of Louis XVI, who was sympathetic to the Third Estate, was dismissed by the king, provoking an angry reaction among Parisians. Crowds formed, fearful of an attack by the royal army or by foreign regiments of mercenaries in the king’s service, and seeking to arm the general populace. Early on 14 July one crowd besieged the Hôtel des Invalides for firearms, muskets, and canons, stored in its cellars

That same day, another crowd stormed the Bastille, a fortress-prison in Paris that had historically held people jailed on the basis of lettres de cachet (literally “signet letters”), arbitrary royal indictments that could not be appealed and did not indicate the reason for the imprisonment, and was believed to hold a cache of ammunition and gunpowder. As it happened, at the time of the attack, the Bastille held only seven inmates, none of great political significance

The crowd was eventually reinforced by mutinous Gardes Françaises (“French Guards”), whose usual role was to protect public buildings. They proved a fair match for the fort’s defenders, and Governor de Launay, the commander of the Bastille, capitulated and opened the gates to avoid a mutual massacre. According to the official documents, about 200 attackers and just one defender died before the capitulation. However, possibly because of a misunderstanding, fighting resumed. In this second round of fighting, de Launay and seven other defenders were killed, as was Jacques de Flesselles, the prévôt des marchands (“provost of the merchants”), the elected head of the city’s guilds, who under the feudal monarchy also had the competences of a present-day mayor.

Shortly after the storming of the Bastille, late in the evening of 4 August, after a very stormy session of the Assemblée constituante, feudalism was abolished. On 26 August, the Declaration of the Rights of Man and of the Citizen (Déclaration des Droits de l’Homme et du Citoyen) was proclaimed. 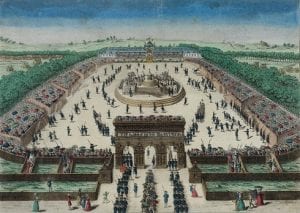 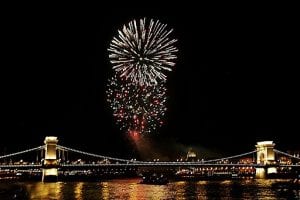 • 1979: A concert with Jean-Michel Jarre on the Place de la Concorde in Paris was the first concert to have one million attendees.

• 1989: France celebrated the 200th anniversary of the French Revolution, notably with a monumental show on the Champs-Élysées in Paris, directed by French designer Jean-Paul Goude. President François Mitterrand acted as host for invited world leaders.

• 1994: The military parade was opened by Eurocorps, a newly created European army unit including German soldiers.
This was the first time German troops paraded in France since 1944, as a symbol of Franco-German reconciliation.

• 1995: A concert with Jarre was held at the Eiffel Tower in Paris.

• 2004: To commemorate the centenary of the Entente Cordiale, the British led the military parade with the Red Arrows flying overhead.

• 2007: To commemorate the 50th anniversary of the Treaty of Rome, the military parade was led by troops from the 26 other EU member states, all marching at the French time.

• 2014: To commemorate the 100th anniversary of the beginning to the First World War, representatives of 80 countries who fought during this conflict were invited to the ceremony. The military parade was opened by 76 flags representing each of these countries.

• 2017: To commemorate the 100th anniversary of the United States of America’s entry into the First World War, French President Emmanuel Macron invited American President Donald Trump to celebrate a centuries-long transatlantic tie between the two countries.

The Bastille Day military parade is the French military parade that has been held in the morning, each year in Paris since 1880. While previously held elsewhere within or near the capital city, since 1918 it has been held on the Champs-Élysées, with the participation of the Allies as represented in the Versailles Peace Conference, and with the exception of the period of German occupation from 1940 to 1944 (when the ceremony took place in London under the command of General Charles de Gaulle); and 2020 when the COVID-19 pandemic forced its cancellation.

The parade passes down the Champs-Élysées from the Arc de Triomphe to the Place de la Concorde, where the President of the French Republic, his government and foreign ambassadors to France stand. This is a popular event in France, broadcast on French TV, and is the oldest and largest regular military parade in Europe. In some years, invited detachments of foreign troops take part in the parade and foreign statesmen attend as guests