According to Dawn, two passenger trains crashed in Pakistan’s Sindh Province on Monday morning, killing at least 30 people and injuring 50 more. The number of those killed or injured is expected to rise.

According to a Pakistan Railways spokesperson, the Millat Express train, which was travelling from Karachi to Sargodha, derailed and crashed on the opposite track. The train then collided with the Sir Syed Express, which was departing Rawalpindi. 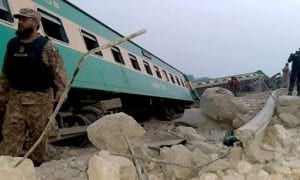 The accident happened near Dharki in Sindh’s Ghotki district. According to Ghotki Deputy Commissioner Usman Abdullah, the accident entirely damaged six to eight compartments, while 13 to 14 derailed.

According to news agency PTI, rescue activities are ongoing, and hospitals in Ghotki, Sharki, Obaro, and Mirpur Mathelo have declared an emergency. Officials, on the other hand, have reported difficulty reaching passengers trapped within overturned train carriages. According to reports, 15 to 20 individuals are still trapped in the wreckage.

Usman Abdullah, a senior official in the Ghokti region, told the Reuters news agency that it was difficult to estimate how many people were still stuck aboard the train.

“There are probably six to eight bogies [carriages] that are completely smashed… there is a sleeper train, an AC [air-conditioned] class, and an economy class, with 47 to 50 people on this side and 50 to 60 people on the opposite train,” he stated.

To deal with the casualties, hospitals in the vicinity have been placed on high alert.The Millat Express from Karachi derailed and fell into another track early Monday, causing the catastrophe. The Rawalpindi-bound Sir Syed Express crashed with it and overturned.

Officials have said that a relief train has been despatched to the collision site, and that helpline centres have been established for passengers, according to local media.

“This is a difficult task. “Using heavy machinery to liberate citizens [still imprisoned] will take time,” Abdullah stated. “We’re also constructing a medical camp to give citizens with medical assistance.”

Imran Khan, Pakistan’s prime minister, offered his sympathies and called for a probe. He said he was “shocked” by the “horrific train disaster at Ghotki early this morning,” which killed 30 people. “Have requested that the Railway Minister visit the scene and provide medical help to the injured as well as support to the families of the deceased. Ordering a thorough study of railway safety flaws.”

According to the authorities, the three major causes of train accidents in Pakistan are lack of track maintenance, signal issues and older engines.

Casualty figures are often high because trains are packed with far greater numbers of passengers than they were designed for.