Aspergillosis is an infection, allergic reaction, or fungal growth caused by the Aspergillus fungus. The fungus usually grows on decaying vegetation and dead leaves. Exposure to the fungus doesn’t necessarily guarantee that you’ll get aspergillosis. 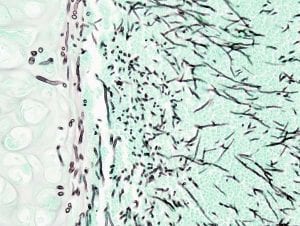 In addition to the symptoms, an X-ray or computerised tomography (CT) scan of the infected area provides clues for making the diagnosis. Whenever possible, a doctor sends a sample of infected material to a laboratory to confirm identification of the fungus.

On chest X-ray and CT, pulmonary aspergillosis classically manifests as a halo sign, and later, an air crescent sign. In hematologic patients with invasive aspergillosis, the galactomannan test can make the diagnosis in a noninvasive way. False-positive Aspergillus galactomannan tests have been found in patients on intravenous treatment with some antibiotics or fluids containing gluconate or citric acid such as some transfusion platelets, parenteral nutrition, or PlasmaLyte.

On microscopy, Aspergillus species are reliably demonstrated by silver stains, e.g., Gridley stain or Gomori methenamine-silver. These give the fungal walls a gray-black colour. The hyphae of Aspergillus species range in diameter from 2.5 to 4.5 µm. They have septate hyphae, but these are not always apparent, and in such cases they may be mistaken for Zygomycota. Aspergillus hyphae tend to have dichotomous branching that is progressive and primarily at acute angles of around 45°

People who are immunocompromised — such as patients undergoing hematopoietic stem cell transplantation, chemotherapy for leukaemia, or AIDS — are at an increased risk for invasive aspergillosis infections. These people may have neutropenia or corticoid-induced immunosuppression as a result of medical treatments. Neutropenia is often caused by extremely cytotoxic medications such as cyclophosphamide. Cyclophosphamide interferes with cellular replication including that of white blood cells such as neutrophils. A decreased neutrophil count inhibits the ability of the body to mount immune responses against pathogens. Although tumor necrosis factor alpha (TNF-α) — a signaling molecule related to acute inflammation responses — is produced, the abnormally low number of neutrophils present in neutropenic patients leads to a depressed inflammatory response. If the underlying neutropenia is not fixed, rapid and uncontrolled hyphal growth of the invasive fungi will occur and result in negative health outcomes.

Prevention of aspergillosis involves a reduction of mold exposure via environmental infection-control. Antifungal prophylaxis can be given to high-risk patients. Posaconazole is often given as prophylaxis in severely immunocompromised patients.

A systematic review has evaluated the diagnostic accuracy of polymerase chain reaction (PCR) tests in people with defective immune systems from medical treatment such as chemotherapy. Evidence suggests PCR tests have moderate diagnostic accuracy when used for screening for invasive aspergillosis in high risk groups.

How to watch the Dragon’s trip live on SpaceX and NASA’s Crew-3 mission?

The current medical treatments for aggressive invasive aspergillosis include voriconazole and liposomal amphotericin B in combination with surgical debridement. For the less aggressive allergic bronchopulmonary aspergillosis, findings suggest the use of oral steroids for a prolonged period of time, preferably for 6–9 months in allergic aspergillosis of the lungs. Itraconazole is given with the steroids, as it is considered to have a “steroid-sparing” effect, causing the steroids to be more effective, allowing a lower dose. Other drugs used, such as amphotericin B, caspofungin (in combination therapy only), flucytosine (in combination therapy only), or itraconazole, are used to treat this fungal infection. However, a growing proportion of infections are resistant to the triazoles.A. fumigatus, the most commonly infecting species, is intrinsically resistant to fluconazole.