In Mexico, a sinkhole with a diameter of more than 70 metres has emerged and is still growing.

The gigantic sinkhole began as a five-metre hole near the town of Juan C. Bonilla in the state of Puebla. It is threatening to consume an adjacent house as it expands.

Authorities from both the state and the federal government are investigating what caused the hole to form and what needs to be done to protect citizens.

In central Mexico, a massive sinkhole with a diameter of 60 metres develops in farmers’ fields. The sinkhole is around 20 metres deep and is located in Santa Mara Zacatepec, Puebla state. Since the sinkhole threatened to engulf the house, a family who lives near it has been evacuated. 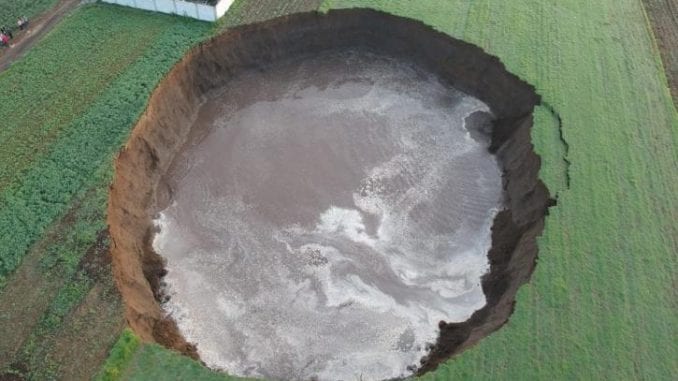 Authorities from both the state and the federal government have been called in to help figure out what caused it to happen and what needs to be done to protect the local population.

A 20-meter-deep, 2,000-square-meter sinkhole opened in the parking lot of a hospital in Naples, Italy, earlier this year, forcing the temporary closure of a nearby house for recovering Covid-19 patients.