Project Glass is a research and development program by Google to develop an augmented reality Head-Mounted Display (HMD). The intended purpose of Project Glass products would be the hands-free displaying of information currently available to most smartphone users, and allowing for interaction with the Internet via natural language voice commands. These glasses will have the combined features of virtual reality and augmented reality. Google glasses are basically wearable computers that will use the same Android software that powers Android smartphones and tablets.

Google Glass is as futuristic a gadget we’ve seen in recent times. A useful technology for all kinds of people including handicapped/disabled.

As per many reports, Google is expected to start selling eyeglasses that will project information, entertainment and, this being a Google product, advertisements onto the lenses. These glasses will have the combined features of virtual reality and augmented reality.
The Google Glasses can use a 4G cell connection to pull in information from Google’s mountain of data and display info about the real world in augmented reality on the lens in front of your eye. As you turn your head you’ll get information about your surroundings and nearby objects from Google Goggles, info on buildings and establishments from Google Maps, even your friends’ nearby check-ins from Latitude. The company has no plans to sell ads into your newly augmented view of the world, but will consider it if the product really catches on. 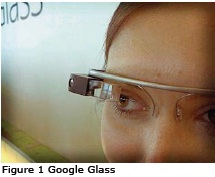 The glasses are not being designed to be worn constantly — although Google engineers expect some users will wear them a lot — but will be more like smartphones, used when needed, with the lenses serving as a kind of see-through computer monitor.

Several people who have seen the glasses, but who are not allowed to speak publicly about them, said that the location information was a major feature of the glasses. Through the built-in camera on the glasses, Google will be able to stream images to its rack computers and return augmented reality information to the person wearing them. For instance, a person looking at a landmark could see detailed historical information and comments about it left by friends. If facial recognition software becomes accurate enough, the glasses could remind a wearer of when and how he met the vaguely familiar person standing in front of him at a party. They might also be used for virtual reality games that use the real world as the playground.

sir please send me the full report of this topic

If you want any ppt and report, Go to www.engineeringuru.com

Maybe this site is too good than seminarsonly.com

Please send me more on this topic